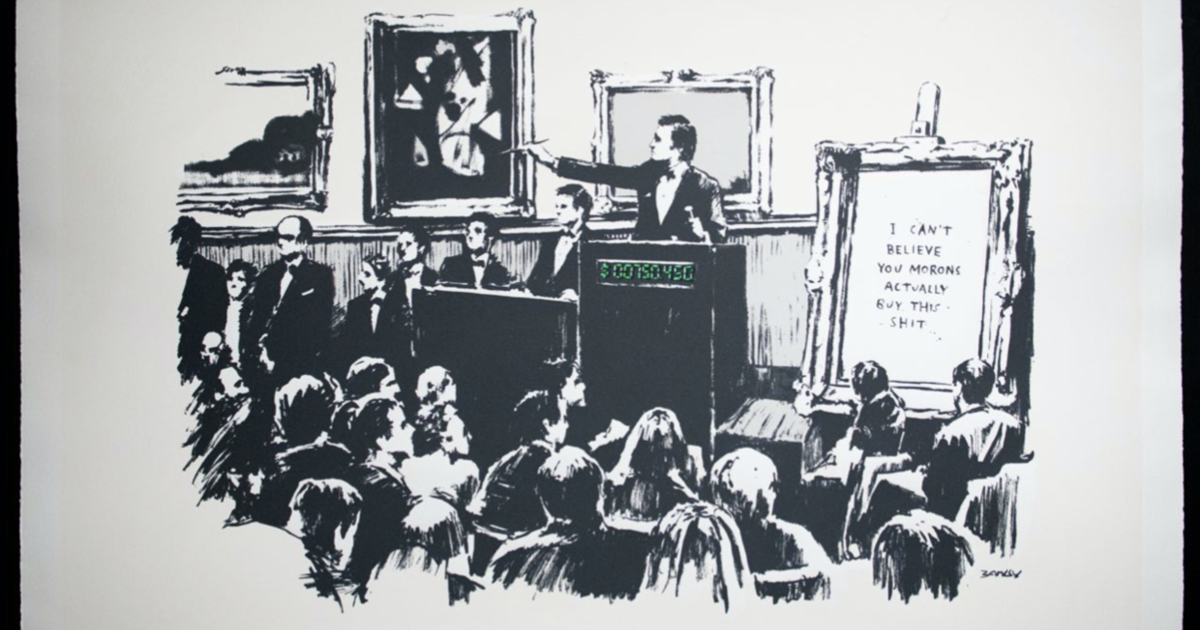 A blockchain company bought a $95,000 Banksy artwork, burned it and broadcast it live on Twitter — all part of a process of turning the work into a virtual asset called a non-fungible token, or NFT.


Injective Protocol, the company behind the stunt, bought the screenprint “Morons (White)” from New York’s Taglialatella Gallery, then burned it Monday evening. The event, which took place in an undisclosed Brooklyn neighborhood, was live-streamed through the Twitter account BurntBanksy.


Moments later, Injective Protocol employees created a digital representation of the art using blockchain technology on the OpenSea, which recently gained notoriety after Mark Cuban used it to issue his own NFT.


While digital art has recently become popular, this event is the first major instance in which a physical artwork was turned into a unique digital asset, according to Injective Protocol’s founder Mirza Uddin.


“We view this burning event as an expression of art itself,” Uddin said, adding, “We specifically chose a Banksy piece since he has previously shredded one of his own artworks at an auction.”


The original print, a black-and-white depiction of an art auction with a mocking message to would-be art buyers, carried Banksy’s signature and was authenticated by Pest Control, the only organization authorized to certify Banksy’s art. The print was one of an edition of 500.


Banksy is an anonymous artist and political activist who gained notoriety by creating graffiti, photos and short films that often contain wry social commentary. The artist does not make public statements.


For Injective Protocol, a three-year-old company that runs a decentralized platform for blockchain transactions, the project is a validation of the blockchain’s ability to stand in for physical art assets, Mirza said.


“We entirely recreate the physical piece and input specifications, such as the art version number into the smart contract code, [so] no one can ever alter the digital art in any way,” said Mirza. “The physical piece will forever be memorialized in this NFT.”


Non-fungible tokens are virtual items that use blockchain technology and smart contracts to assure each item, or asset, is unique and unchangeable. For example, NFTs can be linked to digital photos, videos, virtual trading cards in video games and even digital artwork. While digital items, such as photos, can be copied indefinitely, NFTs cannot, as each is immutably unique, creating scarcity in the virtual assets to which they are linked. NFTs can be transferred or sold, but unlike a dollar bill — of which there are millions of in circulation that are interchangeable and hold equal value to each other— the unique cryptographic signatures of each token, recorded in smart contracts and verified on blockchain, assure that each NFT is an original and cannot be duplicated or divided into smaller parts.


“We believe NFTs hold tremendous promise and blockchain technology can help to further diversify art expression as we have demonstrated with this Banksy burning,” Mirza said.


Still, the company is likely to lose money on the Banksy transaction, because the market for NFTs is unproven.


When asked for an estimate of how much the Banksy NFT might be worth, Mirza said “I have no idea.”


NFT’s have skyrocketed in value in recent weeks. According to Trading Platforms, a site that ranks retail trading sites and currencies, NFT trading volume exceeded $400 million in the past 30 days, with an average of about 17,000 daily active traders. A  survey by the site found that NFTs are driving mainstream consumer interest in cryptocurrency.


“NFTs are valued for their cultural significance and social capital that comes with holding such notable works,” according to the report. “Unlike assets like Bitcoin, NFTs offer the ability to capture individuals’ attention and onboard them into the blockchain space,” it said.


Not everyone is bullish on NFTs. “As someone who collects physical items like sports memorabilia, I get the allure of ownership and exclusivity,” said Drew Olanoff, a writer for TechCrunch. “But the hype around NFTs has been fast and furious,” he said.


“There is a lot of ‘get in now to get rich fast or be left behind’ fandom,” said Olanoff. “The potential upside [is] for artists, but I don’t see it for consumers yet.”


Once the hype slows down, the real value of NFTs will emerge or they’ll cool off, Olanoff said. For now, he cautioned potential buyers to avoid getting swept up in the excitement. “These are asset classes, and even if they’re new, financial restraint can and should still apply,” he said.