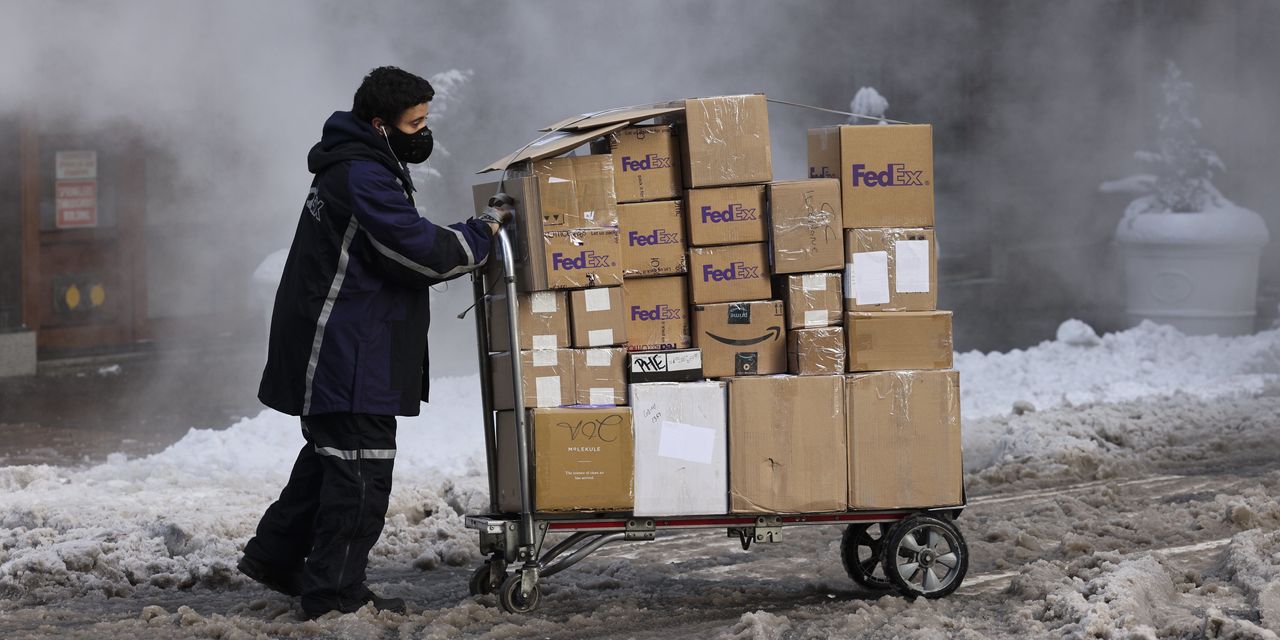 Lorraine Williams drove 45 minutes to Atlanta’s airport on the night of Feb. 22 and paid $136 to

to make sure her package would get to New Orleans in two days. It took more than a week to arrive.

FedEx is struggling with significant delays in delivering packages long after mid-February winter storms sent many parts of the country into a deep freeze, including the delivery company’s Memphis, Tenn., hub. Last week, about one- quarter of FedEx Express shipments didn’t arrive on time, according to ShipMatrix, which tracks the industry.

FedEx said it has been adding shifts and staff to catch up with the backlog and expects service levels to return to normal by the end of the week. “We are working as quickly as possible to deliver customer packages that have been delayed by this national service disruption,” a spokeswoman said. “We deeply regret the impact this has had on our customers, and we are working with them to resolve any delivery issues.”

are coming off a year in which they handled a record number of U.S. packages, as millions of people stayed in their homes and turned to e-commerce during the coronavirus pandemic. Both companies imposed peak surcharges and enforced limits on shippers to manage the volume. The rivals are also helping distribute Covid-19 vaccines across the country.

Memphis is the primary air hub in FedEx’s hub-and-spoke express network, sorting millions of packages from dozens of cargo planes each day. The company said large amounts of snow and ice hit the city and storms disrupted operations at other large locations, including North Texas and Indianapolis. Ice and snow prompted UPS to briefly shut its main air hub in Louisville, Ky., for the first time on Feb. 15.

FedEx said more than 200 employees, including salaried workers, signed up to help clear some of the backlogged packages on Sunday, Feb. 21.

The delays have affected medical supplies and Covid-19 testing samples that are often routed through FedEx’s overnight services.

Aegis Sciences Corp., a provider of Covid-19 testing services, said it had experienced some delays because of FedEx’s service backlog. “We continue to report Covid-19 testing results within 10 hours of receipt,” said Dr.

The company, based in Nashville, Tenn., said it continues to use FedEx but has diverted some volume to other carriers to maximize delivery speeds. “We will make decisions on whether we retain, expand or reduce that over the coming weeks,” Aegis said.

“
‘While you are trying to dig out, the new packages keep coming.’
”

Last week, Feb. 21 to Feb. 27, FedEx Express had on-time delivery of about 76%, an improvement from the prior week, while UPS Express was at 96%, according to ShipMatrix, a software provider that analyzes shipping data. The FedEx Ground service, which handles many e-commerce orders, was less disrupted.

president of ShipMatrix, said some of the difference is FedEx’s greater reliance on airplanes compared with UPS, which mixes its express packages with its ground delivery network. “When you get backed up, it takes a while to catch up,” he said, referring to backlogs in general. “While you are trying to dig out, the new packages keep coming.”

Some consumers like Ms. Williams said they were surprised to discover the delays after FedEx accepted the package and charged for expedited delivery. “FedEx has sophisticated technology,” Ms. Williams said. “I should have been told that FedEx might have delays.”

Her package, a Louis Vuitton handbag, was a birthday gift for a grieving friend. The amount she paid for shipping and insurance was based on the package reaching its destination in two days, but she was told that no refunds would be issued. A FedEx spokeswoman said the company’s money-back guarantee is currently suspended.

What has been your experience with package-delivery delays, if any, after winter storms struck the South? Join the conversation below.

Social media is full of angry FedEx customers looking for their shipments from all over the world. A March 2 company post on FedEx’s

page about Women’s History Month is packed with comments from customers looking for packages. So is a March 3 Facebook post about the company’s pledge to buy electric vehicles and be carbon neutral by 2040.

Keri Svendsen, a graduate student in Springfield, Mass., has been waiting since last week for medication, but tracking information shows it sitting in Memphis since last Thursday. FedEx told her that it opened a case for her and would track down the package. On Wednesday, FedEx declared the package is lost, she said.

While FedEx is working to fix the problems, Wall Street is expecting some impact from the storms when the company discloses its third-quarter financial results on March 18. UBS analyst

lowered his third-quarter earnings projection to $2.90 a share from $3.13 a share to reflect an expected $80 million reduction in pretax profit.

“FedEx has faced a meaningful headwind from the impact of severe winter storms in mid February,” he wrote in a note to clients.

Customers just want to see the FedEx truck arrive at their door. David Lavelle, a retiree in Venice, Fla., has been looking for his $3,000 custom-built guitar from Japan since Feb. 22.

On the day of its expected arrival, he stayed home to sign for the package. Instead, he got a message saying it was delayed. Since then, he said he has watched it get transferred multiple times between Memphis and Indianapolis, but not yet to his doorstep.

“I have no idea where it has been or where it is now,” Mr. Lavelle said.