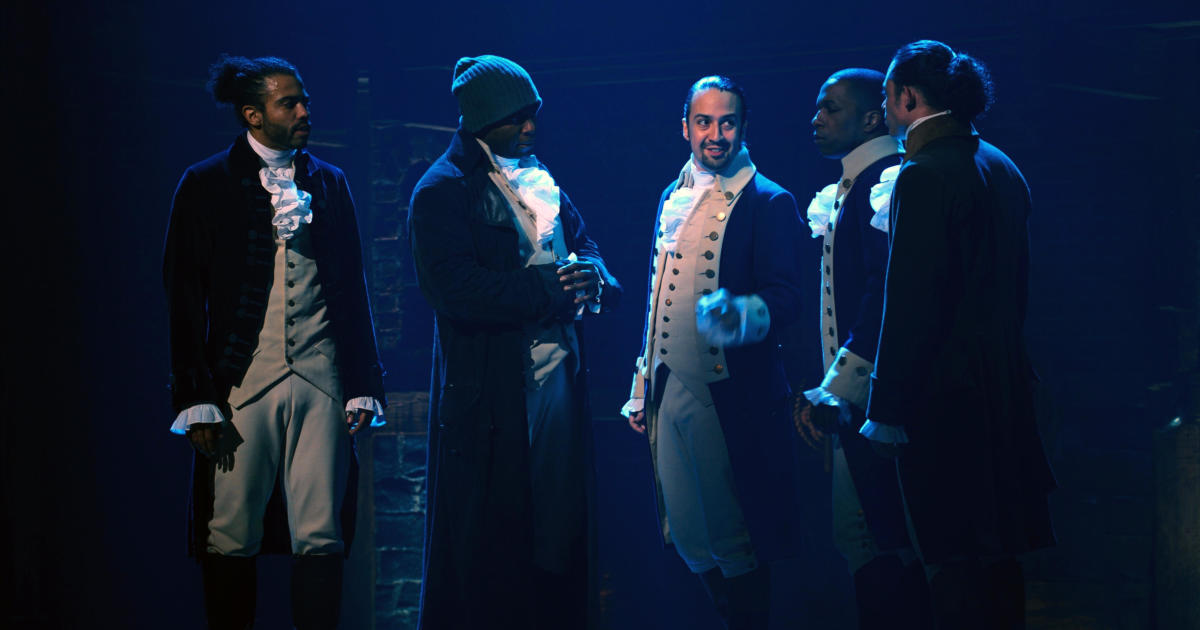 Alex Lacamoire has been working tirelessly throughout the COVID-19 pandemic to get the music of Broadway’s “Hamilton” ready for millions of eager fans on Disney+. The pop culture juggernaut premieres on the streaming platform Friday, July 3 at midnight Pacific Time.

“We have the exit music for the first time,” explained Lacamoire, the show’s Grammy and Tony Award-winning orchestrator. “It’s now been recorded, and it will now be able to be heard.”

The performance was filmed at the Richard Rodgers Theatre on Broadway in June 2016, but the only way people have been able to experience the exit music prior to this new film adaptation was by hearing the band jam as they left the theater. That’s because the exit music is not part of the Grammy-winning cast album that’s been on the Billboard 200 for 246 weeks in a row.

As the show’s orchestrator, Lacamoire’s role was to create the musical arrangements for Lin-Manuel Miranda’s songs and draft each note for what every single musician in the show plays. He’s won three Tony Awards for his craft on some of Broadway’s biggest musicals including “Hamilton,” “In The Heights,” and “Dear Evan Hansen.” Lacamoire also won an Emmy Award for his musical direction on FX’s “Fosse/Verdon,” making him only an Oscar away from an EGOT. He’s also a co-recipient of the “Trailblazing” Kennedy Center Honors with fellow “Hamilton” creators, the composer Lin-Manuel Miranda, director Tommy Kail and choreographer Andy Blankenbuehler.

After several months of day-to-day self-quarantine with his wife in their Upper West Side apartment, he says he now feels “just as busy as I was before the pandemic hit” with a lot of projects happening all at once. Kail delivered the news to Lacamoire that “Hamilton,” which was supposed to launch on Disney+ in 2021, was suddenly bumped up to this year’s Independence Day holiday weekend. It’s a timely release since it’s no secret “Hamilton” is about America’s founding fathers.

Not only has Lacamoire been putting the final touches on “Hamilton” from his home studio but also on the film adaption of his other highly anticipated Lin-Manuel Miranda project: the now-delayed “In The Heights” movie directed by Jon Chu (“Crazy Rich Asians”).

Lacamoire says the creative team was very close to finishing the score’s recording when New York City shut down to stop the spread of COVID-19. While the pandemic provided obstacles, Lacamoire says they were able to overcome them.


“We pushed ourselves and made it happen. We were able to capture all the really important things that we needed to record with the orchestra the day before basically the universe was ending,” Lacamoire explained. “I’m just grateful that we got everything recorded. That allowed us during the shutdown to still be able to work remotely.”

Despite their efforts, “In The Heights,” which was supposed to come out in theaters June 26, was pushed back a year to June 18, 2021 as movie theaters in many parts of the country remain closed. The movie starring Anthony Ramos (who’s also in the Disney+ film of “Hamilton”) as Usnavi, a bodega owner, is based on the 2008 show that won the Tony for Best Musical and catapulted Miranda into stardom.

“I really credit Jon [Chu] for holding onto this belief that this is a movie that deserves to be experienced in the theater,” Lacamoire said of Chu’s decision to hold the film until next summer. “It deserves to have a community around it. It deserves to be seen like a movie in a theater versus something that you sit at home in sweatpants and watch on Apple TV.”

“Hamilton,” however, can and likely will be viewed in sweatpants. With Broadway and several touring productions closed due to the coronavirus, it’s a prime opportunity to showcase it to viewers at home.

“This is a good time for people to be able to access it,” Lacamoire said.

Never mind socially-distant fireworks, this is the spectacle the country will ooh and ahh over this Fourth of July weekend, very much like the fanfare when “Hamilton” first premiered on Broadway. Fireworks lit up the sky over the Hudson River on August 6, 2015 to celebrate its big opening night.

“[Kail’s] given everyone who watches this film the best seat in the house,” said Lin-Manuel Miranda in a press release statement. “I’m so grateful to Disney and Disney+ for reimagining and moving up our release to July 4th weekend of this year, in light of the world turning upside down.”

Diggs, Goldsberry and Odom Jr., along with Cynthia Erivo, starring at the time in “The Color Purple,” won Tony Awards in the four musical acting categories in 2016 for their performances — the first time in Tony history all four of those top awards went to people of color.

“I’ve always loved the spotlight that it shines on people of color,” said Lacamoire of the “Hamilton” cast’s diversity playing roles of our nation’s white forefathers.

While “Hamilton” is centered around the American Revolution of the late 1700s, its themes of fighting to shake off oppression and the dream of what America could become seem to resonate more than ever today, as protests for racial justice continue nationwide.

The Black Lives Matter movement has prompted the Broadway industry to begin taking steps to address long-standing racism in the theater community, There’s the newly formed Black Theater United coalition that aims to protect black people in theater communities across the country. Another organization called Broadway Advocacy Coalition, created in 2016, held a three-day seminar about racism on Broadway and how to overcome it. And an open letter and petition titled “We See You White American Theater,” signed collectively by theater professionals across the country — including “Hamilton” cast members like Miranda and Odom Jr. — sheds light on the indignities and racism that black people face on a day-to-day basis in the industry.

“It was always something that was very important for Tommy, Lin and [producer] Jeffrey [Seller] to be able to have the principal roles be played by people in color,” explained Lacamoire.

“I’ve always loved that — that turns history on its ear a little bit. It gives you a different perception of how things look and what are the things that bring this all together. Because you see a story told by people who are dreaming, people who want something and people who have risked their lives to achieve something that is important to them. I think it is something about that that levels the playing field that allows us to be able to open our minds and our hearts a little bit.”

“We still obviously have a long way to go to learn about that. But I love that ‘Hamilton’ is at least just getting that conversation started in that way.”