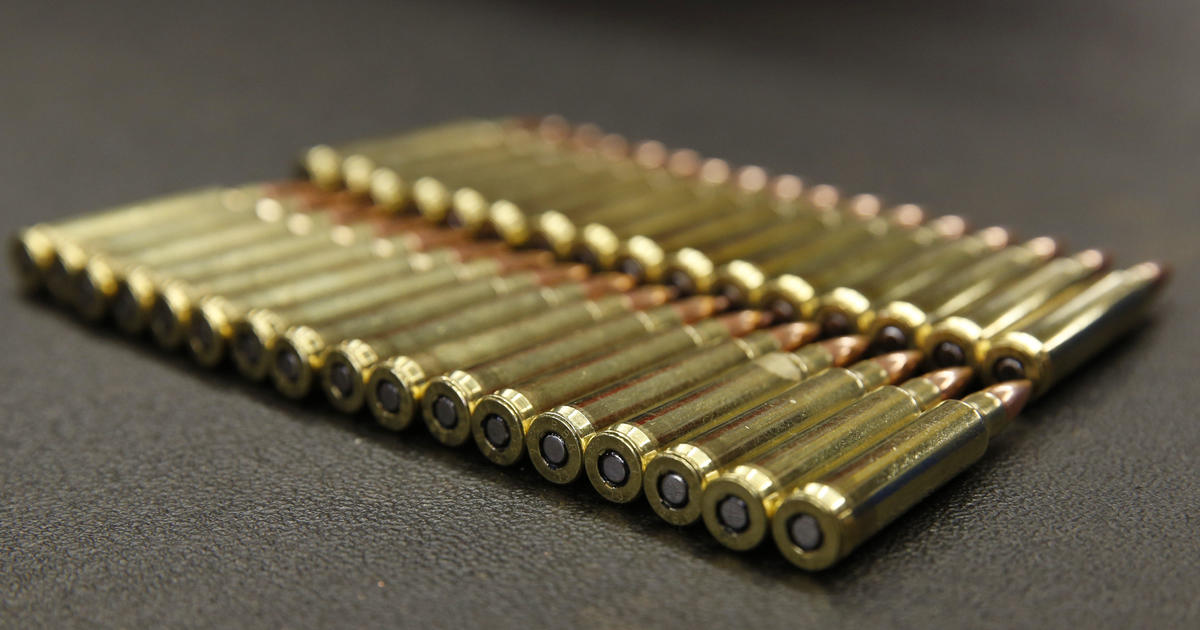 A Nebraska charitable foundation has raised hundreds of thousands of dollars for patients battling cancer from the sale of one of America’s deadliest bullets. The unlikely pairing underscores that, while gun manufacturers in the U.S. face mounting pushback for their role in a string of mass shootings, the makers of the ammunition that goes into those guns have largely escaped scrutiny.

That’s certainly the case for the Critical Defense Lite bullet, made by Hornady Manufacturing of Grand Island, Nebraska. The round’s hollow tip is designed to split apart upon penetrating the body, allowing it to shred as much as 60% more flesh and organ tissue than a regular bullet.

It’s also pink — so consumers know that when they buy the bullet, a portion of the sale will go toward fighting cancer. Hornady has sent proceeds for the past six years to the Grace Cancer Foundation, also based in Grand Island. The ammo promotion is the charity’s best fundraiser by far.

Despite such alliances, ammo manufacturers may soon find themselves increasingly in the spotlight. Walmart said last week that it would restrict the type of ammo it sells in its stores. The move followed several recent mass shootings, including one massacre in a Walmart in El Paso, Texas, that left 22 dead.

Walmart also said it sent letters to the White House and Congressional leaders to impose new restrictions that would keep guns out of the hands of people who do harm with them. On Thursday, the CEOs of 145 companies weighed in, sending a letter to Congress urging lawmakers to improve background checks and pass “red flag” legislation to alert cops to potentially problematic gun owners.

Walmart didn’t specify what brands of ammo it would no longer sell. But shares of the largest publicly traded non-military ammunition makers, Vista Outdoor and Olin, both fell on the Walmart news last week and are down 28% and 14% since the El Paso store shooting in early August.

On Tuesday, Vista Outdoor told analysts that Walmart’s ammo ban could cut as much as $40 million in revenue from its current fiscal year, which ends next March, but that it expects bullet buyers to go elsewhere. Analyst Gautam Khanna at Cowen & Co., who follows Vista Outdoor’s stock, earlier this month said the Walmart move would add a new obstacle for the company. He doesn’t recommend investors buy shares of Vista Outdoors.

Walmart has said it expects its market share of ammo sales to drop from 20% to 9%. Getting there may take time. According to the website Brickseek, which checks in-store inventory, a box of 200 rounds of Winchester’s 5.56 semi-automatic ammo is still available at Walmart’s El Paso store on Dyer Street. There are 13 boxes, for a total of 2600 rounds, in stock. Walmart has said it will stop selling ammo for automatic weapons once its inventory runs out.

Gun manufacturers have seen a steep drop in sales in the past few years, in part because of reduced fears of stricter gun regulation under President Donald Trump. At the same time, ever since the 2018 Parkland high school mass shooting in Florida, a number of large corporations have said they will longer do business with the gun industry. Dick’s Sporting Goods decided to end nearly all gun sales in its stores. Delta and United Airlines ended discount programs with the National Rifle Association.

A few public pension funds, including California’s Calpers, also said they would no longer invest in gun manufacturers. All of the nation’s largest banks, except Wells Fargo, have said they are either ending or curtailing their lending to the gun industry.

BlackRock, the nation’s largest asset management firm, has had to answer criticism that its investment products are also the largest owners of gun company shares. Meanwhile, BlackRock in the past year has launched a number of gun-free investment funds.

Still, ammunition makers continue to face fewer challenges to their business than others in the gun industry. Total ammo sales in the U.S. will likely top $4 billion this year, according to market research firm IBISWorld, with about $3.2 billion in sales to average civilians

Bullet sales at Vista Outdoor, which is the nation’s largest ammunition maker, are up more than $35 million in the first six months of the year and on pace to top $850 million in 2019 even after the Walmart ammo news.

At Olin, a chemical company that is also a large ammo maker, sales of Winchester-brand bullets are down this year, though less than 5%, but are still likely to exceed $600 million.

Unlike with guns, ammunition buyers face no federal background checks or waiting periods — nor is there much talk of implementing such rules. Bullets can be bought and sold in most states over the internet.

New Jersey is the only state in the nation that bans the sale of expanding bullets, like the one that raises money for the Nebraska cancer charity, and even the Garden State has exceptions for target shooting. Armor-piercing bullets are federally banned for handguns, but a move by the Obama administration in 2015 to consider banning similar bullets for rifles was eventually scrapped after pushback from the National Rifle Association and other gun groups.

Earlier this year, when Vista Outdoors announced it was exiting the gun manufacturing business to focus on its other sporting brands, outdoor gear chain REI quickly announced it would resume selling Vista’s other products, which include CamelBak hydration backpacks and Giro hiking and skiing helmets. The fact that Vista was not leaving the business of selling bullets was never mentioned.

The Walmart ban could impact Vista more than others. Nearly 15% of the company’s overall sales come from Walmart, but the company does not say how much of that revenue is from bullets, versus bike helmets or any of the company’s other non-shooting products. Still, as a sign of how important Walmart is to Vista, the outdoor brands company maintains an office in Bentonville, Arkansas, which is also Walmart’s corporate home.

Last year, Citigroup drew media attention for announcing it would no longer process payments for the sale of guns to anyone who hadn’t undergone a background check or who was under 21. The banking giant also said it would bar the sales of bump-stocks and high-capacity magazines by its business partners.

Yet that didn’t stop Citi, along with JPMorgan Chase, from helping ammo maker Olin raise $750 million in debt earlier this year. Olin derives 10% of its revenue from bullets, including rounds such as the PDX1 Defender that’s designed to penetrate vital organs and cause maximum blood loss.

Perhaps not surprisingly, such inconsistencies are also visible in the political realm. New York Gov. Andrew Cuomo earlier this month signed two bills into law that will prevent out-of-staters from legally bringing guns into New York without submitting to a mental health background check, as well as give police access to those records. The governor has also backed a New York state investigation into the finances and activities of the National Rifle Association.

Yet Cuomo does not seem to have cut his administration’s ties to executives who work in the ammo industry. Long-time Olin board member John O’Connor is one of the four directors of the state-sponsored New York Green Bank, which Cuomo set up in 2013. Cuomo’s office did not return a call for comment.

Hornady Manufacturing, which makes the ammo linked to the cancer charity, has built its marketing around how deadly its bullets can be. In 2011, for instance, the company released the “Zombie Max,” which it said was specifically designed to “vaporize zombie varmints.” With hollow-tips, and a version that can be fired from an AR-15, the Z-max bullets do serious damage in non-zombies as well.

Hornady is run by Steve Hornady, who is a board member of the NRA and the son of the company’s founder. Unlike most other manufacturers who stress their sales to police forces and the military, Hornady heavily markets it bullets to individual consumers for use in self-defense and hunting.

Hornady also says that 98% of its bullets end up being shot at targets. In a 2016 profile with magazine “Guns and Ammo,” Steve Hornady said that was a good thing. If all of its bullets were shot at game, he said with a laugh, “There wouldn’t be a single living animal left in America,” the magazine reported.

The Grace Cancer Foundation was originally founded by two breast cancer survivors, but now provides financial assistance to anyone who is being treated for cancer in the Grand Island area. Much of the money it gives to help cancer patients comes from hometown corporate benefactor Hornady.

On the foundation’s website there is an annual smiling picture of Grace’s administrators and board members in front of a giant Hornady check. Said Executive Director Sarah Koch in last year’s press release: “Hornady is extremely dedicated to our community and this gift is a direct reflection of their commitment.”

Just over 40,000 people are killed from gun violence in America, which is only about 1,000 less than the number of women who die of breast cancer each year. And while gun deaths are rising, breast cancer fatality rates have been falling for decades.

Representatives from the Grace Foundation and Hornady did not return calls for comment for this article.

Rukmani Bhatia, an expert on gun violence prevention at the Center for American Progress, said ammunition makers haven’t received the same scrutiny as gunmakers when it comes to preventing shootings. The strongest measure would be to ban the sale of large-capacity magazines, she said. Restrictions on selling ammo would also help, she added.

Said Bhatia, “Gun deaths are a preventable problem that is growing because of a system that is set up to do nothing about it.”