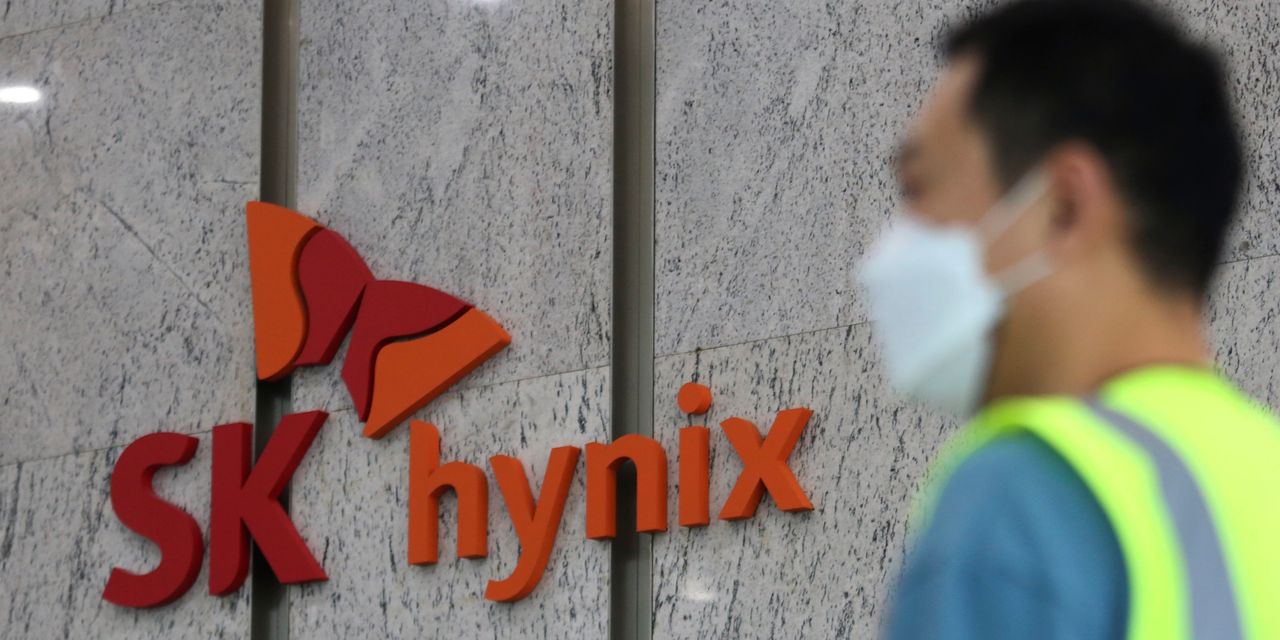 $9 billion deal to sell most of its memory-chip business to a South Korean company accelerates the industry consolidation around a ubiquitous technology component.

based just outside Seoul, would control close to one-quarter of the NAND flash memory market and become the industry’s second-largest player, according to market-research firm TrendForce. NAND flash provides the gigabytes of storage used in smartphones, computers and other gadgets.

The deal, first reported by The Wall Street Journal on Monday, also includes Intel’s wafer and solid-state drive businesses, plus the U.S. company’s manufacturing operations in Dalian, China. Intel would retain its unit specializing in memory chips for large data centers and cloud providers. The companies said they intend to secure governmental approvals for the deal by late next year. Intel will continue to produce chips until then, they said.

The roughly $315 billion semiconductor industry has been on a deal frenzy. In September,

agreed to pay $40 billion for Arm Holdings, a British chip designer backed by

in July agreed to pay more than $20 billion for

The Journal reported earlier this month that

was in talks to buy rival chip maker

Semiconductor companies globally are under pressure as U.S. trade moves limit sales to a major buyer, China’s Huawei Technologies Co., a provider of mobile-network gear and smartphones. Chip making is one of the world’s most expensive lines of business, requiring multibillion-dollar facilities to churn out better-performing products on ever-tinier products.

Memory chips enjoyed a historic rise in prices for much of 2017 and 2018. The industry’s fortunes darkened after smartphone sales dried up and manufacturers were left with excess supply during much of 2019. But in recent months, prices have begun to rebound amid stronger demand from data-center operators trying to keep up with extra internet usage resulting from the coronavirus pandemic.

SK Hynix was the world’s third-largest semiconductor company in 2019, with $22.3 billion in revenue, according to Gartner Inc., compared with Intel’s $67.7 billion and

With the Intel acquisition, SK Hynix’s annual sales could quadruple to $100 billion over the next decade, said Hansel Jones, chief executive of International Business Strategies Inc., a consulting firm in Los Gatos, Calif.

“Even though you pay a reasonably high price upfront, there’s less competition, the price goes up and you make more margin,” Mr. Jones said.

“It takes out one competitor from the NAND flash competition,” said Avril Wu, a senior research director at TrendForce, though she added that competition remains fierce.

It also further consolidates memory-chip power in South Korea. In another major type of memory chips called DRAM, the two South Korean companies account for roughly three-quarters of the market. After the Intel deal, SK Hynix and Samsung will control more than two-fifths of the NAND flash market.

One of the main upsides for SK Hynix in the deal is Intel’s superior control-chip technology, which helps with efficiency, said Akira Minamikawa, a Tokyo-based senior consulting director for Omdia, a market researcher. This can improve SK Hynix’s pricing power, given that the company often charges less than rivals, he added.

SK Hynix was founded as Hyundai Electronic Industrial Co. in 1983 and merged with

SK Hynix operates one facility in Icheon, South Korea, where the company is based, plus three factories in China. Intel’s Dalian facility will become SK Hynix’s fourth China-based plant.

The company also has options to bulk up further. SK Hynix holds convertible bonds that give it the opportunity to gain a 15% stake in Kioxia, which is controlled by a consortium led by Bain Capital.

Kioxia recently said it expected SK Hynix may soon exercise its right to get the stake. However, the arrangement also restricts SK Hynix from expanding its stake beyond 15% until 2028. Kioxia had planned to list its shares in an initial public offering in October, but it called off the plan, citing a loss of sales caused by U.S. sanctions on Huawei.

Write to Elizabeth Koh at Elizabeth.Koh@wsj.com