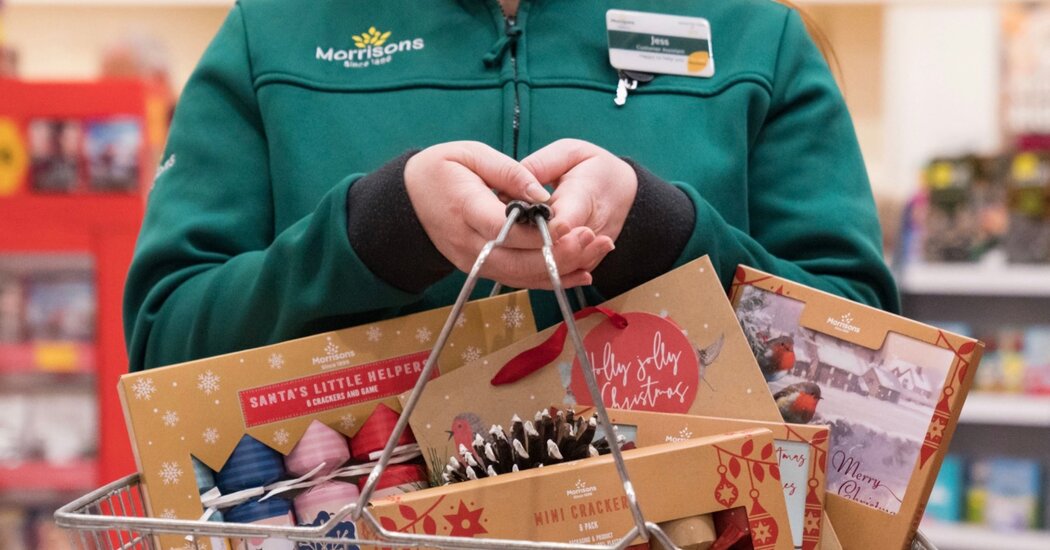 This year, the holiday season in the United Kingdom will be a little less sparkly.

Three major retailers — the grocery chains Morrisons and Waitrose and the department store company John Lewis — have announced that they will not use glitter in their in-house brand, single-use Christmas products this year. That means no glittery snowflakes on Christmas cards, no sparkling snowmen on stickers, and no twinkling stars on wrapping paper.

“Glitter is made from tiny particles of plastic and is an ecological hazard if it becomes dispersed on land, rivers and oceans — where it takes hundreds of years to degrade,” Morrisons said in a statement.

It appears that no similar glitter reckoning is underway in the United States. Major retailers including Walmart, Target, Walgreens, CVS and Costco did not immediately respond to questions about whether they were making efforts to ban or limit glitter. The Environmental Protection Agency did not respond to questions about whether regulators or companies were taking steps to ban glitter in the United States, or how glitter bans could affect the environment.

Glitter, a pretty substance known not only for its utility in arts and crafts but also for its tenacity in sticking to clothing, carpets and car seats, is also (often) a microplastic, or a piece of plastic that is 5 millimeters or less in diameter.

Microplastics have come under increased scrutiny in recent years, and scientists have been finding them everywhere. They pollute the ocean, where they can be ingested by fish and other organisms. Some of the smaller pieces can hang in the air as invisible atmospheric pollutants.

They can travel extreme distances that way, and they have been found in remote wilderness areas that might have been thought to be pristine.

In a report this month, which researchers called the first global estimate of the amount of microplastics on the sea floor, Australia’s national science agency found that 9.25 million to 15.87 million tons were embedded there — far more than what is on the ocean’s surface.

Compared with other microplastics, glitter’s color and shine suggest it might have certain metals or other additives that are especially harmful to the environment, said Robert C. Hale, a professor at the Virginia Institute of Marine Science at the College of William & Mary. (It is hard to say which additives — that would depend on where and how the glitter is manufactured.)

But in terms of volume, glitter is not a major pollutant in the grand scheme of things. It makes up far less than 1 percent of the microplastics that pollute the environment, Dr. Hale said.

The vast majority of microplastics in our environment did not start out so small; they were manufactured as larger pieces and broke down. That’s why plastic packaging is a much bigger threat to our ecosystem than glitter.

Also significant are the synthetic fabrics in many of the clothes we wear, which can introduce microplastic fibers into our water systems every time they go through a wash cycle.

So while consumer items like microbead exfoliants or glittery decorations may catch our attention and even inspire legislation, they make up a tiny fraction of the microplastics clogging our air and oceans. Banning these items is a small step in the right direction, Dr. Hale said, “but it doesn’t really solve the problem.”

Amy V. Uhrin, the chief scientist of the National Oceanic and Atmospheric Administration’s Marine Debris Division, agreed that glitter was just one of many different kinds of microplastic pollutants. “It is difficult to say what impact a glitter ban would have,” she added.

Researchers are still trying to understand the reach and impact of sparkly microplastics, and Dr. Uhrin pointed to recent studies that found that glitter was abundant in some environmental samples, particularly in soils; and that significant amounts of glitter had been found in wastewater sludge.

John Lewis, Waitrose and Morrisons may have banned glitter in their holiday lineups, but they still sell products that include plastic or come in plastic packaging. Both Morrisons and John Lewis, which operates Waitrose supermarkets, said they had significantly reduced the use of plastic in packaging and inventory in recent years and had pledged to continue.