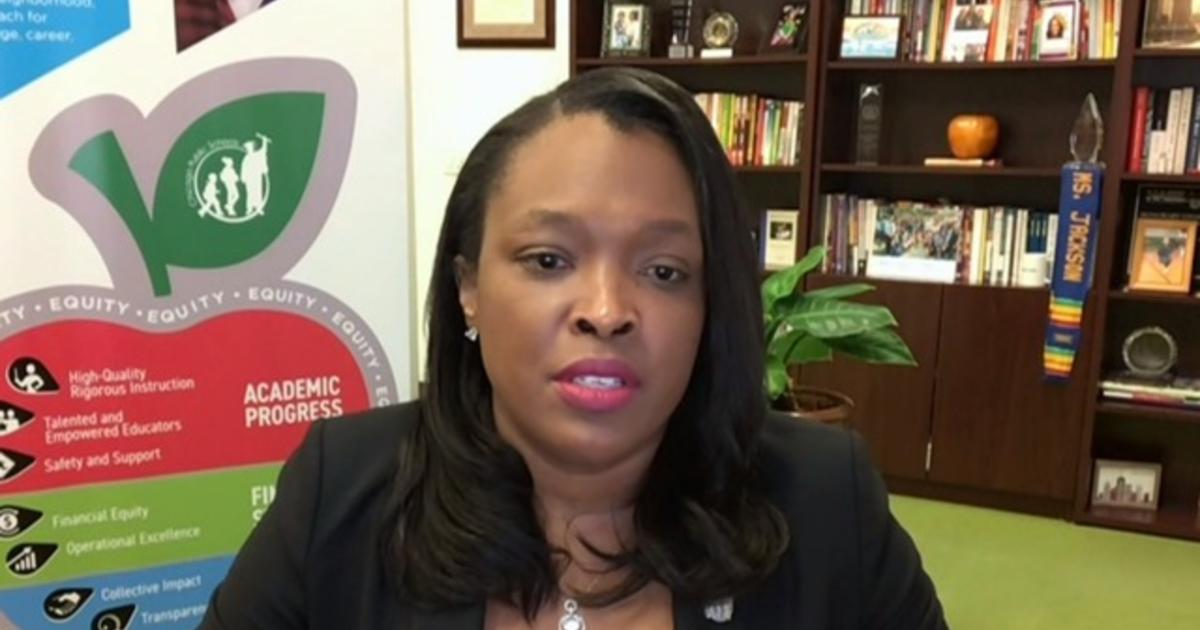 The following is a transcript of an interview with Janice K. Jackson, Chicago Public Schools CEO, that aired January 31, 2021 on “Face the Nation.”

MARGARET BRENNAN: Chicago public schools are set to open tomorrow for the first time since March, but school officials and the teachers union have been at odds over terms of the teachers returning to the classroom. Chicago Public Schools CEO Dr. Janice Jackson joins us. Good morning to you.

MARGARET BRENNAN: The mayor has demanded that elementary and middle schools open tomorrow. Will the teachers union go on strike?

DR. JACKSON: Well, right now, we’re in the middle of negotiations that have really heated up over the past couple of weeks. Our goal is to reopen schools as planned tomorrow on February 1st for students in our K through 8 grades. It’s also important to note we did bring back our early childhood students and some of our students with disability- disabilities earlier this month and had real good success with reopening. So we are looking forward to restarting again.

MARGARET BRENNAN: What happens to teachers if they don’t show up tomorrow?

DR. JACKSON: Well, the goal right now is to- to get a resolution. CTU has made it clear that they want a deal. We share those same sentiments, but we’re still far apart on a couple of key issues, such as vaccination and how we account for accommodations for individuals who maybe are just, you know, petrified to come back into schools because of COVID. We believe that we have to reopen schools. We’ve been closed for almost a year now. And as a school system, we’re starting to see some of the effects of schools being closed. Many of our students aren’t logging on. We are seeing African American and Latinx students in particular being especially hard hit. And our goal is to really give every parent an option. Those families who want to remain remote will have that option through the remainder of the school year. But we have thousands of families who want an in-person option because they’re essential workers themselves.

MARGARET BRENNAN: How many children do you expect to be in the classroom tomorrow?

DR. JACKSON: Right now, we’re anticipating 77,000 students, which is roughly a third of the students here in CPS that are eligible for in-person instruction. That’s twice the size of the second largest school district here in Illinois. And so reopening Chicago public schools is extremely important. We should also note that private and parochial schools in the city have been open since August, and we learned a lot from their implementation plans and look to guidance from public health officials, as well as the CDC to make sure we had a solid plan for reopening.

MARGARET BRENNAN: So on that CDC plan, I know this report this week got a lot of attention really urging schools to reopen and saying that transmission can be stopped if masks are worn and there’s social distancing. But this same report said there should still be restrictions in the community and it cited indoor dining. Chicago has already opened its bars and restaurants. How do you feel about that?

DR. JACKSON: Yeah, I think we’ve learned a lot about reopening from the past spring. Definitely prioritizing the reopening of schools has to be at the top of the list and our mayor has done that. We have reopened bars and restaurants at limited capacity here in the city. But one thing that was really important in that report is that it showed that community spread does not necessarily impact spread within a particular school and that implementing mitigating- mitigation strategies with fidelity actually is more successful- will, you know, lead to more success with reopening. And so we’re focused on that. We have a solid plan in place that goes above and beyond the guidance that we’ve heard from city as well as CDC officials. And we believe that we can safely reopen. And we’ve been open for three weeks or we have been open for three weeks with a great degree of success. So, the time is now for students to return to the classroom.

MARGARET BRENNAN: So you mentioned that one of the issues you’re still in disagreement with with the union is over vaccination. Chicago is one of the few cities in this country that gets its supply directly from the federal government. The federal guidelines prioritize based on age. That’s why I was asking Cedric Richmond, the adviser to the president, about it. I wonder if it would be helpful to you if the Biden administration explicitly said to prioritize teachers in the front of the line as essential workers?

DR. JACKSON: Yeah, so in Chicago and in Illinois, we are prioritizing teachers. They are included in 1b, which is currently underway. I think the issue is definitely around vaccine supply. The more vaccines we’re able to get, we’ll be able to vaccinate people sooner. We have started vaccinating individuals in our school system, which is important to note. We started with our health care workers and those individuals who work closely with students where they may be at more risk for exposure. But again, in order to accelerate vaccination of our teachers, we quite frankly need more supply.

MARGARET BRENNAN: So, you- why couldn’t you move them to the front of 1b ahead of other essential workers with the supply you have now?

DR. JACKSON: Well, our city’s health department is in charge of that, but what I’ve heard them say is that, look, the vaccine is a part of a public health tool kit in order to mitigate the spread of COVID. Rule number one is that you have to disseminate those vaccines in places where we’re trying to stop the spread of COVID. Schools are not significant sources of spread. And so this is as much- not as much- this is a public health solution. We have to start with that. Some of these other things are incredibly important, but some of them are political decisions. Our health department is trying to combat the effects and the spread of COVID. And we are prioritizing places where we see the spread raging on.

MARGARET BRENNAN: All right, Dr. Jackson, none of this is easy. Thank you for your time this morning. We’ll be back in a moment.