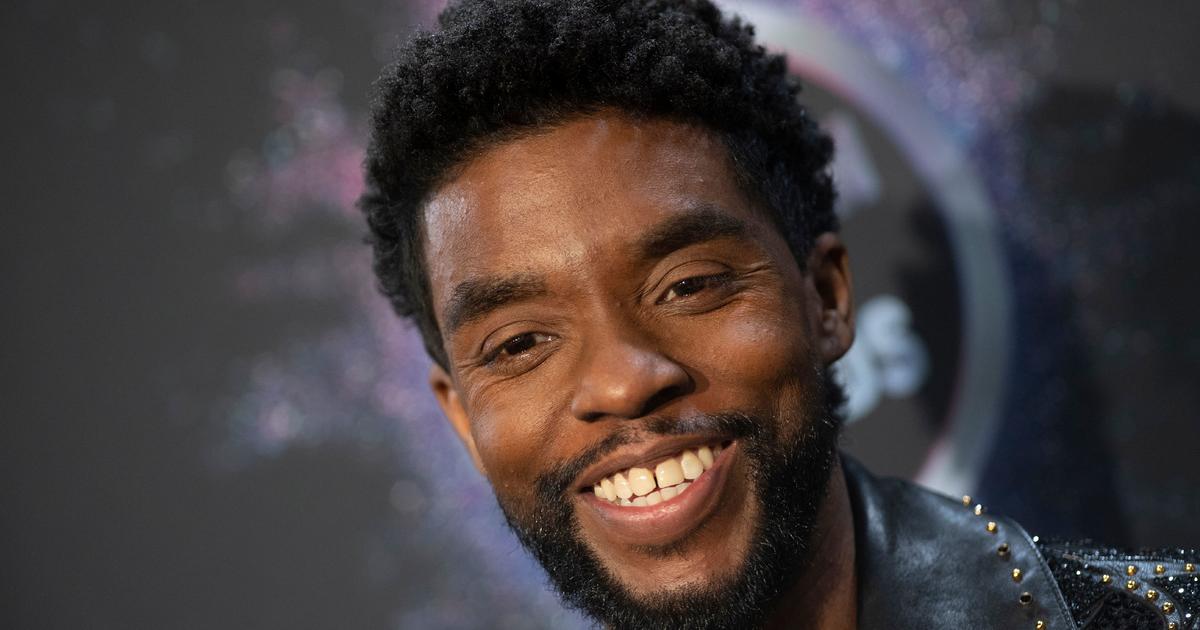 Celebrities, politicians and fans are mourning the loss of actor Chadwick Boseman, who died Friday after a four-year battle with colon cancer at the age of 43. A statement said Boseman was diagnosed with stage three colon cancer in 2016, and it progressed to stage four — a diagnosis the star kept private.

Now, tributes are pouring in for the actor on social media.

“Heartbroken. My friend and fellow Bison Chadwick Boseman was brilliant, kind, learned, and humble,” Harris tweeted, referring to their alma mater, Howard University. “He left too early but his life made a difference. Sending my sincere condolences to his family.”

In his final tweet, Boseman expressed his support for Harris in the upcoming election.

“The true power of @ChadwickBoseman was bigger than anything we saw on screen,” Biden tweeted. “From the Black Panther to Jackie Robinson, he inspired generations and showed them they can be anything they want — even super heroes. Jill and I are praying for his loved ones at this difficult time.”

“Chadwick came to the White House to work with kids when he was playing Jackie Robinson,” former President Obama tweeted. “You could tell right away that he was blessed. To be young, gifted, and Black; to use that power to give them heroes to look up to; to do it all while in pain – what a use of his years.”

“It was meant to be for Chadwick and me to be connected, for us to be family,” Bassett, who played Boseman’s mother in “Black Panther,” wrote on Instagram. “But what many don’t know is our story began long before his historic turn as Black Panther. During the premiere party for Black Panther, Chadwick reminded me of something. He whispered that when I received my honorary degree from Howard University, his alma mater, he was the student assigned to escort me that day. And here we were, years later as friends and colleagues, enjoying the most glorious night ever! We’d spent weeks prepping, working, sitting next to each other every morning in makeup chairs, preparing for the day together as mother and son.”

“I am honored that we enjoyed that full circle experience. This young man’s dedication was awe-inspiring, his smile contagious, his talent unreal. So I pay tribute to a beautiful spirit, a consummate artist, a soulful brother…’thou aren’t not dead but flown afar…’. All you possessed, Chadwick, you freely gave. Rest now, sweet prince.”

“Our hearts are broken and our thoughts are with Chadwick Boseman’s family,” the official Twitter account for the film said. “Your legacy will live on forever. Rest In Peace.”

“I don’t have words. Rest In Peace, Bruh. Thank you for all you did while you were here,” Brown tweeted. “Thank you for being a friend. You are loved. You will be missed.”

“Gutted at the loss of you. We needed you now more than ever,” Waithe wrote on Instagram. “I loved you, man. We all did. You will be missed.”

“Our little black boys lost a superhero today. Black Panther has wings now. It’s as if we all gained an angel. This man made sure our heroes would live on forever.”

“Heroes like: Jackie Robinson, Thurgood Marshall, and James Brown. You loved us. May your life remind us to always love on each other.”

“Our hearts are broken and our thoughts are with Chadwick Boseman’s family,” Marvel tweeted. “Your legacy will live on forever. Rest In Peace.”

“My prayers go out to Chadwick’s family and loved ones,” Pratt tweeted. “The world will miss his tremendous talent. God rest his soul. #wakandaforever”

“I’m so shocked and heartbroken about Chadwick,” Legend tweeted. “He was such a bright light, such a gifted performer.  He brought grace, elegance and power to everything he did.  He always seemed to carry our ancestors with him. And now he joins them far too soon.”

“i will miss you, birthday brother,” Cheadle tweeted. “you were always light and love to me. my god …forever and ever …”

“All I have to say is the tragedies amassing this year have only been made more profound by the loss of #ChadwickBoseman,” Ruffalo tweeted. “What a man, and what an immense talent. Brother, you were one of the all time greats and your greatness was only beginning. Lord love ya. Rest in power, King.”

“An immeasurable loss. From “Black Panther” to “Da 5 Bloods,” Chadwick Boseman brought strength and light to the screen, every time,” The Academy tweeted.

“We are all heartbroken by the tragic loss of #chadwickboseman — an extraordinary talent, and one of the most gentle and giving souls I have ever met,” the executive chairman of the Walt Disney Company tweeted. “He brought enormous strength, dignity and depth to his groundbreaking role of Black Panther; shattering myths and stereotypes, becoming a long-awaited hero to millions around the world, and inspiring us all to dream bigger and demand more than the status quo. We mourn all that he was, as well as everything he was destined to become.”

“For his friends and millions of fans, his absence from the screen is only eclipsed by his absence from our lives. All of us at Disney send our prayers and heartfelt condolences to his family.”

“A warrior of light til the very end,” Washington tweeted. “A true king. I am without words. May he rise in power.

“Rest in Power King T’Challa. My heart is so heavy right now,” Saldana wrote on Instagram. “Your passing has hit me hard. I will tell my sons about you forever. You were one of the classiest men I have ever met in my life.”

“It was an honor to have shared minutes with you on screen and to have crossed paths with you during press. Though our acquaintance was light you always left a lasting impression because of your energy, poise and gentle manner. May the Universe deliver you to your promise land brother.”

“Chadwick Boseman brought history to life on the silver screen, from Jackie Robinson, James Brown and Thurgood Marshall,” King tweeted. “As Black Panther, he was also a superhero to many. And despite his 4 year long battle with cancer, he kept fighting and he kept inspiring. He will be missed.”

“We never know what people are enduring. Humans…we are wonders,” King tweeted. “Thank you, Chadwick, for gifting us with your greatness in the midst of a painful struggle.”

“Chadwick was someone who radiated power and peace. Who stood for so much more than himself. Who took the time to really see how you were doing and gave words of encouragement when you felt unsure,” Larson tweeted. “I’m honored to have the memories I have. The coversations, the laughter. My heart is with you and your family. You will be missed and never forgotten. Rest in power and peace my friend.”

“What a gentle gifted SOUL. Showing us all that Greatness in between surgeries and chemo,” Winfrey tweeted. “The courage, the strength, the Power it takes to do that. This is what Dignity looks like.”

“You told OUR stories. You reminded us that we are royal,” Ross tweeted. “Thank you for all you shared. A truly remarkable & kind person. You are walking with the ancestors now. Rest easy, rest in power & in peace, Chadwick. Sending so much love to his family & loved ones. #RepresentationMatters.”

“Chadwick’s passing is absolutely devastating. He was our T’Challa, our Black Panther, and our dear friend,” the president of Marvel Studios and Chief Creative Officer of Marvel said in a statement. “Each time he stepped on set, he radiated charisma and joy, and each time he appeared on screen, he created something truly indelible. He embodied a lot of amazing people in his work, and nobody was better at bringing great men to life.”

“He was as smart and kind and powerful and strong as any person he portrayed. Now he takes his place alongside them as an icon for the ages. The Marvel Studios family deeply mourns his loss, and we are grieving tonight with his family.”

“I’m absolutely devastated. This is beyond heartbreaking. Chadwick was special. A true original,” Evans tweeted. “He was a deeply committed and constantly curious artist. He had so much amazing work still left to create. I’m endlessly grateful for our friendship. Rest in power, King.”

“May you have a beautiful return, King,” DuVernay tweeted. “We will miss you so.”

“Chadwick…..no words to express my devastation of losing you,” Davis tweeted. “Your talent, your spirit, your heart, your authenticity……..It was an honor working beside you, getting to know you….Rest well prince…May flights of angels sing thee to thy heavenly rest. I love you!”

“Gonna miss you mate. Absolutely heartbreaking,” Hemsworth wrote on Instagram. “One of the kindest most genuine people I’ve met. Sending love and support to all the family xo RIP.”

“This was one of my final texts from the brilliant & once-in-lifetime talent, @chadwickboseman – take this in & celebrate life,
Josh Gad wrote on Instagram, sharing photos of a heartfelt text from Boseman. “He knew how precious every moment was. Take none of it for granted.”

Arsenal striker Pierre Emerick-Aubameyang paid tribute to Boseman on Saturday, celebrating with the “Wakanda Forever” salute from “Black Panther” after scoring in a match against Liverpool.

British racing driver Lewis Hamilton set a new track record at the Belgian Grand Prix qualifying session on Saturday — and celebrated with the “Wakanda Forever” salute on top of his car.⁠

Prior the game 5 between the LA Lakers and the Portland Trailblazers, a moment of silence was held for Boseman, along with Cliff Robinson and Lute Olsen. The Lakers later tweeted an image of LeBron James doing the “Wakanda Forever” salute.