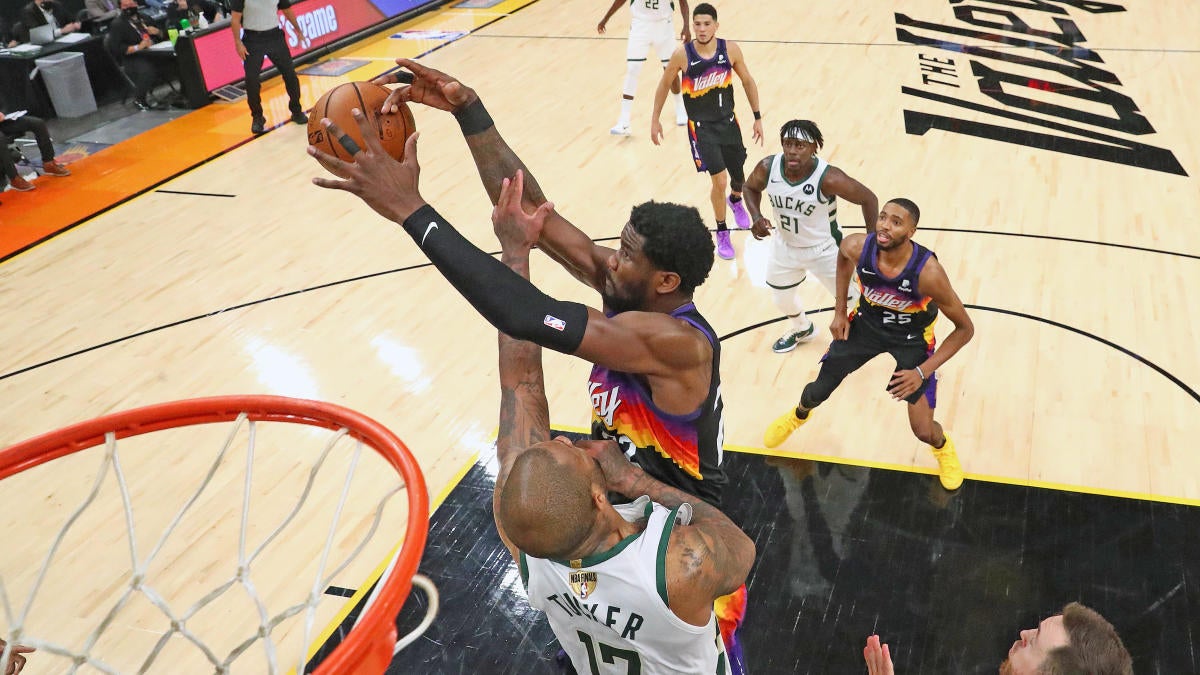 It’s not just that every Sun touched the ball. It’s that everyone except Ayton, who spent the possession roaming the baseline and drawing defenders into his orbit, touched the ball at least twice. “Any coach in America, I’m sure they would love to show their team that clip,” Paul said in the afterglow of the 118-108 victory that gave Phoenix a 2-0 lead in the NBA Finals.

“We actually talked about that play right after the game, me and Mikal,” Booker said. “And he was like, ‘I think that was the most pumped I’ve ever been after a play.'” I was like, ‘Me too. Same here.'”

In that the Bucks were constantly scrambling and the Suns were a step ahead, it was a microcosm of the game. It was also a reflection of what coach Monty Williams has tried to instill in the team. Williams wasn’t with the Spurs in 2014, but he’s had stints in San Antonio as a player, a coaching-staff intern and an executive. When they were at their most connected, tapping into whatever life force makes magical moments like this materialize out of random basketball, coach Gregg Popovich called it Summertime.

“That’s just who we are,” Williams said. “One of our pillars is sharing the ball. My time in San Antonio and being under Pop for all those years, I learned that when the ball moves like that, one, everybody gets to take ownership and, two, it can have an effect on the defense when you move the ball. Now, it’s not commonplace in the NBA to have that many passes, but that was a huge momentum play for us. But that’s who we have been for two years.”

You cannot choreograph plays like that. The best you can do is create the conditions for Summertime to arrive. Paul recalled postgame that Williams had said on a road trip that Phoenix’s starters had the worst plus-minus of any team in the league. “That hurt,” he said, but the Suns “knew that we had to figure it out.” Paul said that they didn’t rush out of the gym after practices and shootarounds, that they built confidence and trust over the course of the season. He mentioned that they’d worked on screening angles. It wasn’t the first time a Phoenix player had brought up that specific subject after a win during these playoffs.

To Milwaukee’s credit, it adjusted after the opener. The Suns were too comfortable on Tuesday, and, much like the Bucks did in the conference finals, they ramped up the pressure in the second game. Jrue Holiday harassed Paul full-court, fought over screens. Instead of asking Brook Lopez to switch onto star guards, coach Mike Budenholzer asked the entire team to rotate, recover and repeat.

Giannis Antetokounmpo started the game on Crowder instead of Bridges, perhaps so he’d be in better position to disrupt the Suns’ double-drag screens. Score-first reserves Bobby Portis and Bryn Forbes played 11 combined minutes. On offense, Milwaukee pounded the offensive glass and lived at the free-throw line. Antetokounmpo made playoff history with a 20-point third quarter and finished with 42 points in 40 minutes.

At times, it felt like Milwaukee was onto something. Paul had an uncharacteristic six turnovers, and Booker didn’t attempt a single free throw. For all of the Bucks’ efforts, though, the Phoenix was more efficient on Thursday than it was on Tuesday, in the halfcourt and otherwise, according to Cleaning The Glass. The Suns shot 20 for 40 from 3-point range, including 10 for 17 in the corner, a direct consequence of Milwaukee’s decision to dial down the switching in favor of more conventional coverage. They were not perfect, but they were not rattled.

Phoenix, like the rest of the basketball-watching planet, knows it is playing against an opponent that prioritizes rim protection. Lopez prefers to plant himself in and around the paint, but when he’s forced to play higher up, the other Bucks help him out by positioning themselves in the gaps to shut down driving lanes. The Suns exploited this for their first basket of the game, a wide-open 3 for Crowder from Booker.

Shortly thereafter, when one pick-and-roll failed to produce an advantage, Crowder slipped a screen, collapsed the defense and found Bridges uncovered in the corner:

After Paul turned down a 3 with Khris Middleton stunting at him, Booker created another drive-and-kick 3, finding Crowder in the corner:

Bridges scored 27 points on 8 for 15 shooting and did most of his damage inside the arc. He attacked a closeout for a positively Middletonian leaner in the second quarter:

And he back-cut Middleton for a two-handed dunk in the third quarter, ducking his head under Lopez’s encroaching arm.

Once again, Milwaukee tried its best to keep Phoenix off-balance. It was physical, but largely avoided fouls. It mixed the Lopez lineups with switchy smallball. Against pick-and-rolls Portis briefly blitzed and, late in the game, Pat Connaughton showed. Whatever the Bucks did, though, the Suns knew there was a counter. Paul could no longer size up a slow-footed big man one-on-one, but that meant he could get into his bag of tricks in the middle of the floor:

“I feel like we have seen a lot of situations and different coverages, and we have been through it all through the regular season and stressing the details of the game,” Booker said. “So, I think we’re prepared for this moment.”

Middleton, Holiday and Connaughton all said that the Bucks overhelped, leading to too many open 3s. They were overhelping, though, because they were rightly worried about Paul and Booker getting to their sweet spots. It is possible that Milwaukee will find a better balance in Game 3 on Sunday, and it’s also possible that Phoenix will simply shoot less accurately from long range.

Through two games, however, there is a stark contrast when it comes to ball movement, player movement and halfcourt execution. To Paul, the biggest play of the game was not the Summertime spectacular near the end of the first half, but Ayton’s offensive rebound with about four minutes left in the game. The Bucks had gone small, leaving them vulnerable on the boards, and Phoenix’s stars had missed consecutive jumpers. Ayton retrieved the ball and immediately passed it to Paul, who extended Phoenix’s lead to nine points with a corner 3.

Milwaukee was better than the Suns on the offensive glass, but scored only four more second-chance points because they were mostly Antetokounmpo free throws rather than wide-open 3s. If that crunch-time possession was a gut punch, it was because the Bucks had spent so much energy just trying to remain in striking distance and needed way more possessions than Phoenix to do so. The way the Suns’ offense is humming, giving them extra opportunities is fatal.