A new coronavirus variant carrying a mutation that appears to make it more transmissible has been detected in the U.S.

The variant, called AY.1 or ‘Delta plus,’ is a sub-lineage of the mutant strain that was first detected in India and is spreading across the globe.

It has acquired the spike protein mutation called K417N, which is also found in the Beta variant first identified in South Africa.

Some scientists worry that the mutation, coupled with other existing features of the Indian ‘Delta’ variant, may lead to it spreading more easily.

It is currently unclear where the variant originated with some researchers saying it may have come from Nepal, others saying it first cropped up in India and a few suggesting Europe is the origin point.

According to a recent report from the UK government, at least 85 cases have been found in America, but there is no evidence that Delta plus is rapidly spreading across the country. 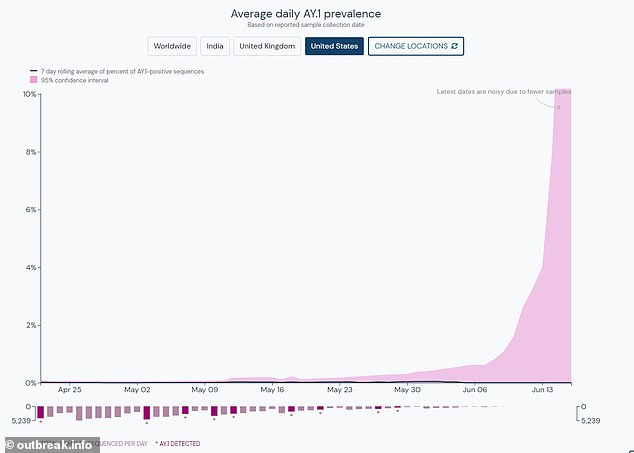 As of June 16, at least 85 cases of the ‘Delta plus’ coronavirus variant – which has a mutation that makes it more transmissible – have been detected in the U.S. 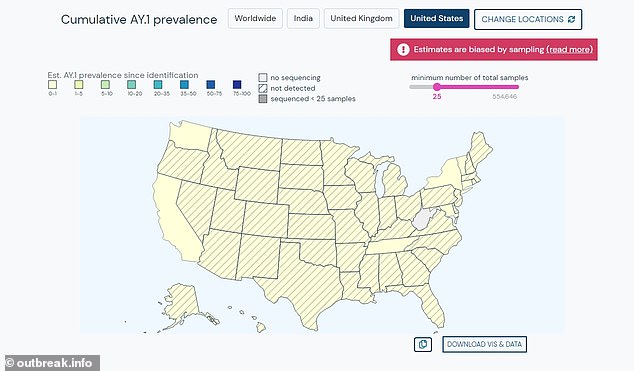 Samples have been found in California, Connecticut, Maryland, New York, Tennessee, Vermont and Washington as early as April 22, but there is no evidence the variant is rapidly spreading

As of June 16,  at least 197 cases has been found from 11 countries: Britain, Canada, India, Japan, Nepal, Poland, Portugal, Russia, Switzerland, Turkey and the U.S.

The earliest case in India is from a sample taken on April 5 and health ministers say around 40 cases have been observed in the states of Maharashtra, Kerala and Madhya Pradesh, with ‘no significant increase in prevalence’.

Britain said its first five cases were sequenced on April 26 and they were contacts of individuals who had travelled from, or transited through, Nepal and Turkey.

No deaths were reported among the UK and Indian cases.

Meanwhile, according to outbreak.info, the variant was first detected in the U.S. on April 22 and it makes up less than 0.5 percent of cases.

The website lists California, Connecticut, Maryland, New York, Tennessee, Vermont and Washington as the states where samples have been identified.

Studies are ongoing in India and globally to test the effectiveness of vaccines against this mutation.

‘WHO is tracking this variant as part of the Delta variant, as we are doing for other Variants of Concern with additional mutations,’ the World Health Organization (WHO) said in a statement sent to Reuters.

‘For the moment, this variant does not seem to be common, currently accounting for only a small fraction of the Delta sequences…Delta and other circulating Variants of Concern remain a higher public health risk as they have demonstrated increases in transmission.’

But India’s health ministry warned that regions where it has been found ‘may need to enhance their public health response by focusing on surveillance, enhanced testing, quick contact-tracing and priority vaccination.’ 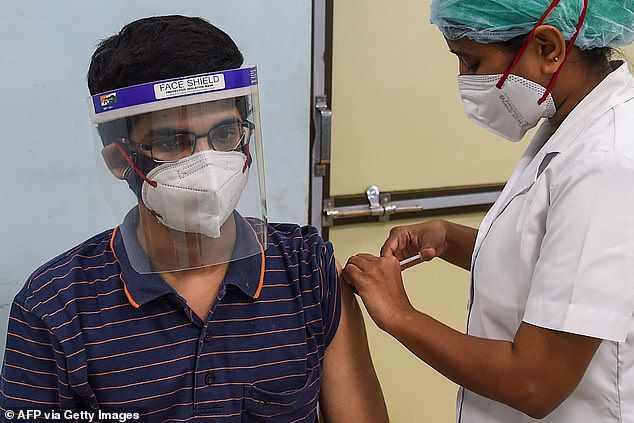 A virologist in India said the Delta plus variant may reduce the effectiveness of COVID-19 antibody treatments due to the K417N mutation. Pictured: A student is vaccinated in Mumbai, June 22

Shahid Jameel, a top Indian virologist, said the K417N was known to reduce the effectiveness of a cocktail of therapeutic monoclonal antibodies.

There are worries Delta plus would inflict another wave of infections on India after it emerged from the world’s worst surge in cases only recently.

‘The mutation itself may not lead to a third wave in India – that also depends on COVID-appropriate behavior, but it could be one of the reasons,’ said Tarun Bhatnagar, a scientist with the state-run Indian Council for Medical Research.

He said there is ‘nothing’ is known about how transmissible, vaccine-resistant or deadly the new strain is.

But he added: ‘Given that it has remained at very low frequency everywhere where it has been identified strongly suggest it is not more transmissible than its Delta progenitor [the original Indian variant].’

What do we know about the ‘Delta plus’ variant’?

When and where was it discovered?

Some scientists believe the variant first emerged in Nepal after the Indian variant mutated.

Scientists believe the country is the most likely origin of the virus because of its similarities to the Indian variant, and the detection of so many cases on flights from the Himalayan nation.

Only three cases has been identified in Nepal, but the country carries out very little Covid surveillance.

Other scientists say the variant was first detected in India and some say Europe is the origin point.

What mutations does it have?

The variant is a mutated version of the Indian type but with a new mutation — called K417N — which has also been spotted on the South African variant.

Is it more infectious and can it evade vaccines?

There are no studies at present showing whether it is more infectious or can evade vaccines compared to other variants.

But scientists fear it has combined the worst features of the the Indian and South African variants, making it more transmissible and more resistant to vaccines.

How deadly is it?

It is not clear whether the mutant strain is more deadly, but it is being watched closely by scientists.

Studies suggest the Indian variant is not more deadly than the original virus — but it may raise the risk of infected patients being hospitalized.

How many cases have been detected in the UK?

However, that reflects the number of times the strain has been sequenced, meaning the same person testing twice would come up as two counts.