The G7 summit is not to blame for spiralling Covid cases in Cornwall, the county’s health chief said today.

Rachel Wigglesworth, the region’s director of public health, argued infections were already increasing before the three-day summit took place because of May’s easing of restrictions.

Leaders of the UK, US, Canada, Japan, France, Germany and Italy descended on the region between June 11 and 13, along with their teams, security staff, journalists and protesters.

A handful of hotels, cafes and bars in the surrounding area were forced to shut after summit because of Covid outbreaks.

And Cornwall’s Covid infection rate has also quadrupled in size in the past week, the Government’s own data shows.

A local MP said the link between the summit and the ‘tsunami’ of infections was ‘undeniable’.

But No10 played down the link yesterday, insisting the rise in cases was down to the relaxation of restrictions on May 17.

Ms Wigglesworth also denied the G7 was to blame in an interview on BBC Radio 4’s Today programme. 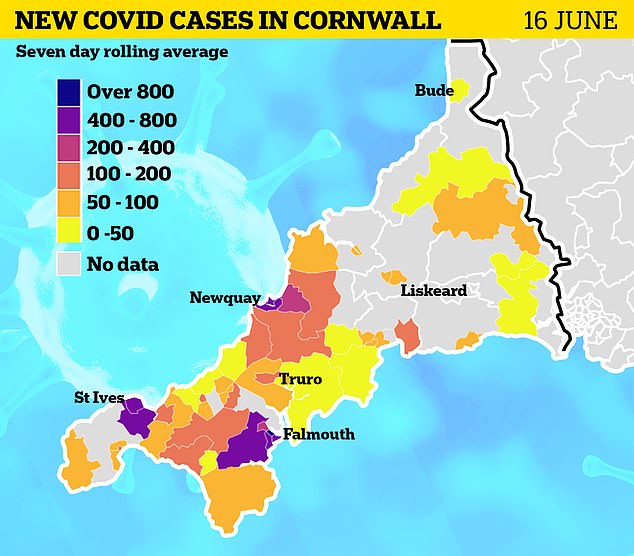 Four areas in Cornwall, including St Ives and Halsetown, Towednack, Lelant and Carbis Bay, Ponsanooth, Mabe Burnthouse and Constantine, as well as Falmouth West and South, have all recorded over 800 cases per day per 100,000 in the seven days up to June 16

She said the ‘rapid rise’ in case numbers was in response to Covid restrictions being eased last month, as well as the school half-term holiday from May 31 to June 4.

England entered step three of the roadmap on May 17, which allowed pubs, bars and restaurants to open indoors. It also allowed people to once again meet in groups of six indoors, or 30 outdoors.

Ms Wigglesworth claimed 18 to 30-year-olds were ‘particularly affected’ by the rise in cases in Cornwall because they are largely unvaccinated.

She was asked whether she would ‘reject the mischievous thesis’ that the influx in cases was linked to the summit.

Ms Wigglesworth said: ‘We did see an increase in some of our case rates, as I say, in these younger age population some time before any of the G7 summit events.

‘And we were encouraging a lot of our population and also the people who visited for the summit in Cornwall to test regularly so that we could identify any cases.

Despite the huge increase in Covid infections, the number of people dying from the virus  in Cornwall and the Isles of Scilly has remained flat, with just one death recorded in May and none so far in June

Figures from June 20 show that 393,517 have received their first vaccine dose in Cornwall and the Isles of Scilly

Data shows that 307,370 people had received their second Covid jab by June 20

Hopes are rising for a foreign summer holiday season in August as ministers are ‘working on’ plans to exempt fully vaccinated Britons from quarantine rules.

Matt Hancock confirmed ministers are looking at how to scrap the requirement for people to isolate for 10 days on return from an amber list country.

The Health Secretary said he is ‘in favour of moving forward in this area’ and replacing quarantine with daily testing.

On the issue of travel quarantine, Mr Hancock told Sky News: ‘This hasn’t been clinically advised yet – we’re working on it.

‘We’re working on plans to essentially allow the vaccine to bring back some of the freedoms that have had to be restricted to keep people safe.

‘After all, that’s the whole purpose of the vaccination programme, that’s why it’s so important that every adult goes out and gets the jab.’

His comments came amid growing anger in the tourism and aviation sectors over the Government’s traffic light system as travel bosses demand the restrictive rules are overhauled.

‘So that proactive approach did identify cases both in the community and particularly at at university that had an outbreak early on before the G7.

‘So quite a number of those cases can be tracked back to that group and then through into some of our hospitality venues.

‘I think we need to be clear the Delta variant from our experience in Cornwall does transmit really rapidly,’ she said.

‘It can spread very quickly particularly among our unvaccinated group.’

She said the council is ‘really tracing down and trying to suppress’ outbreak clusters and encouraged people living in or visiting Cornwall to use rapid tests, so they can identify positive cases ‘as early as possible’.

Ms Wigglesworth said she still would encourage visors to come to Cornwall, but to follow Covid rules and take tests before arriving.

A spokesperson for Boris Johnson yesterday claimed there was no link between the summit and the spike in cases.

The spokesperson said yesterday: ‘We are confident that there were no cases of transmission to the local residents.

‘All attendees were tested, everyone involved in the G7 work were also tested during their work on the summit.

‘We always said, following the move to step three, that we will see cases rising across the country. That is what we’re seeing playing out.’

But critics say the link between the summit and mass of Covid infections must be linked.

Former local Liberal Democrat MP Andrew George, who is now a councillor in Cornwall, said: ‘The correlation between G7 and the tsunami of Covid-19 caseload in St Ives/Carbis Bay and Falmouth is undeniable.

‘It ought to drive public bodies to at the very least maintain an open mind about the connection between the two.

‘Those who were responsible for that decision and for the post-G7 summit Covid-19 case management and assessment should be held to account for their decisions and actions.’ 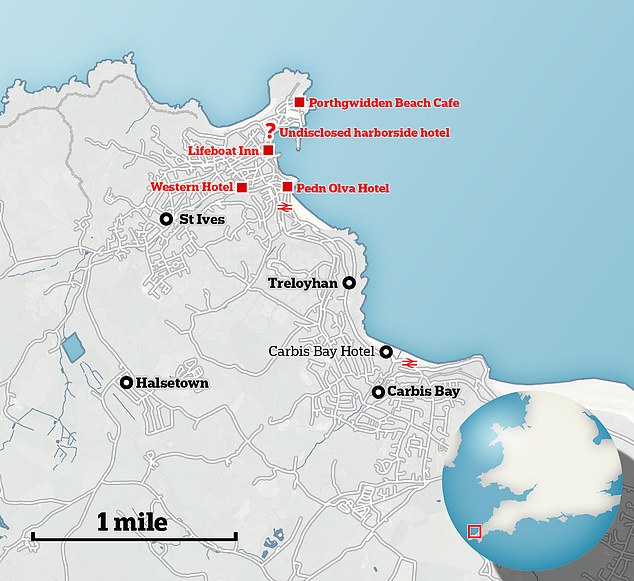 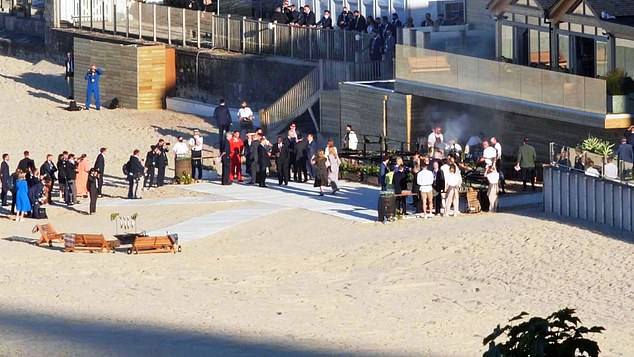 Covid cases in Cornwall and the Isles of Scilly began to rapidly increase at the beginning of June, in line with the trend across the UK, official data shows.

The Delta variant, which was first identified in India and is thought to be around 80 per cent more infectious than the previously dominant Kent ‘Alpha’ variant, is now linked with 99 per cent of all cases in England.

But despite the rapid spread of the virus, deaths and hospitalisations have remained low.