Democrats – led by Rep Katie Porter of California – called on the federal health agency to ban the devices that they believe serve as a gateway to children forming anicotine addiction.

However, Acting FDA Commissioner Dr Janet Woodcock was non-committal about banning or allowing vapes as she addressed House Oversight and Reform Committee.

The FDA already announced earlier this year that they will move to get menthol cigarettes off of the market after being pushed to do so by President Joe Biden.

‘If the FDA banned all flavored e-cigarettes, would less kids continue to vape, among those who have started, in your opinion?’ asked Porter, according to CNN. 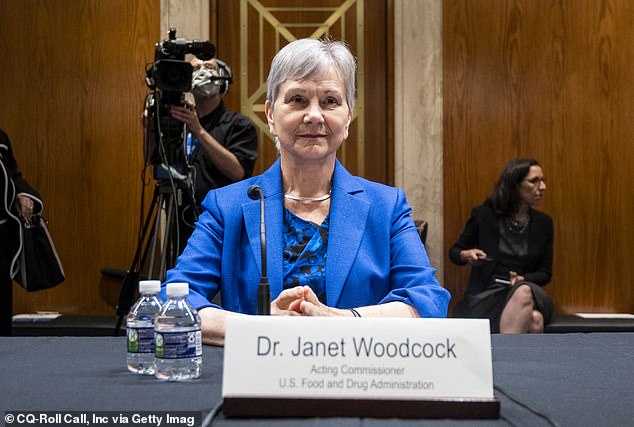 Dr Janet Woodcock deflected pressure from congressional Democrats to put an e-cigarette ban in place, not committing to doing it or not

Dr Woodcock replied: ‘While I can’t predict the future, I think that might be likely.

‘We also would have to, regardless, limit advertising and sales in targeting children and other practices.’

Flavored tobacco products have often been the blame for an increase in youth nicotine abuse with a slate of bills passed across the country to ban them.

A 2020 survey found that more than 80 percent of youths who consumed nicotine did so through flavored vaped or e-cigarettes.

The survey also showed that many were transitioning from the flavored nicotine to menthol cigarettes, which also have a mint flavor.

The FDA hopes to close that bridge with the menthol ban, but some states and cities are taking it even further.

Last year, sale of all electronic cigarettes was banned in San Francisco and Chicago banned the sale of flavored nicotine.

The entire state of New York became the first to do so when it banned the sale of flavored tobacco products last year.

A bill in Florida that would have done the same passed through the state legislature in 2020, but was vetoed by Gov Ron DeSantis.

The flavored products are often marketed to kids, almost like different flavors of candy, and brands like JUUL are often blamed for causing a recent uptick in teen nicotine usage.

‘If kids have the choices of any tasty flavor, they’re going to go for it, and I’m speaking to you from experience here as a mom of three school-aged kids,’ Porter said.

‘But if their only choice was a brown, tobacco-flavored snow cone, they are going to walk away.’

Nicotine is addictive on its own, though, and can also cause health problems for smokers. 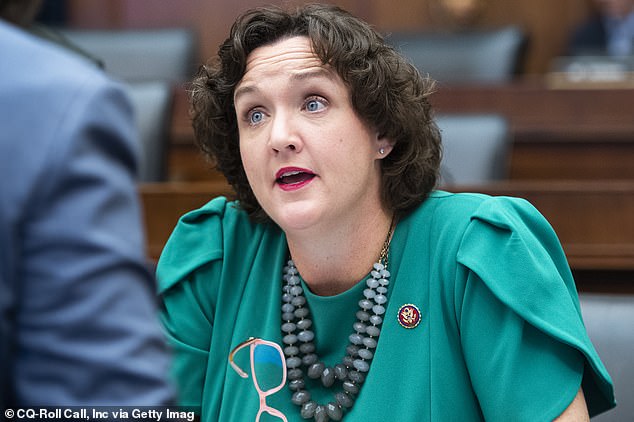 Rep Katie Porter (pictured) pressured FDA leadership to commit to banning the sale of e-cigarettes during a hearing on Wednesday, saying the devices help get children addicted to tobacco

Woodcock refused to commit to her agency banning the usage of flavored e-cigarettes, despite repeated pressure from multiple Democrats during the hearing.

‘Dr Woodcock, you may not be willing to do it, but I just want to make sure America understands, you have the authority to commit today to preventing millions of kids from becoming addicted to vaping by making the decision and the commitment today to us,’ Porter said.

While the push to ban these devices by some lobbying groups and Democrats may be in the interest of public health, they could have a reverse effect.

A study published in May found that an e-cigarette ban in San Francisco actually led to an increase in teen tobacco usage, as many teens went straight to cigarettes instead of just using nicotine first.

‘These findings suggest a need for caution,’ study author Dr Abigail Friedman, an assistant professor of health policy at the Yale School of Public Health, who conducted the study, said in a statement.

‘While neither smoking cigarettes nor vaping nicotine are safe per se, the bulk of current evidence indicates substantially greater harms from smoking, which is responsible for nearly one in five adult deaths annually.

‘Even if it is well-intentioned, a law that increases youth smoking could pose a threat to public health.’