The recipients developed Guillain-Barré syndrome, which can cause paralysis and leave patients in crippling pain.

All four cases were spotted in the Nottingham area, where around 700,000 people have had the British firm’s coronavirus jab.

British health chiefs have yet to offer a public breakdown of how many cases of the syndrome have been spotted in vaccine recipients across the entire country.

But a similar link has been spotted in both Australia and India, where AstraZeneca’s vaccine is also being dished out. It is also a known rare side effect of flu and HPV jabs.

AstraZeneca’s jab — which is given as a double-dose — has also been heavily linked to deadly blood clots in younger adults.

For that reason, UK drug watchdogs have recommended under-40s, who face a tiny risk of falling seriously ill with Covid, get alternative jabs.

But data is now also emerging that shows Pfizer’s jab — the other main option being administered in the UK — may cause heart inflammation. 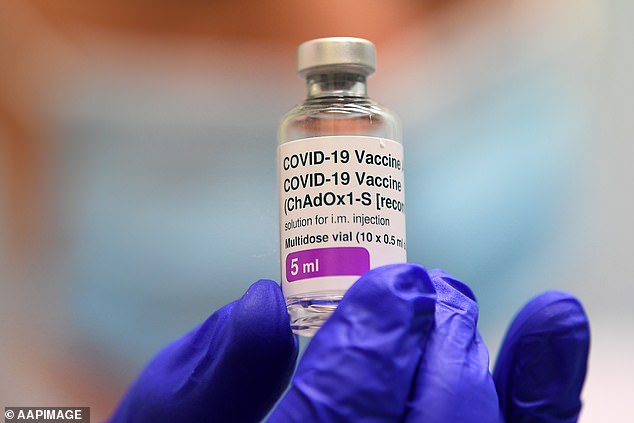 Cases of Guillain-Barre syndrome after AstraZeneca’s vaccine were described in two separate studies in the journal Annals of Neurology.

The complication — normally triggered by an infection — usually occurs in around one in 100,000 people in the UK and US.

What is Guillain-Barré syndrome?

Guillain–Barré syndrome is a rare disorder in which the immune system goes into overdrive and the body attack its own nerves.

Common symptoms of the rare condition include weakness and tingling in the limbs.

As patients’ conditions worsen, this can lead to parts of the body — or in some cases the whole body — being paralysed.

The syndrome is rare, affecting about one in 100,000 annually in the UK and US.

Fewer than 20,000 cases are diagnosed per year in the US, according to the National Institute of Neurological Disorders and Stroke.

Doctors say it is often triggered by a viral or bacterial illness, such as Campylobacter jejuni.

There is no cure. Treatment focuses on restoring the nervous system.

It can be fatal if it involves the respiratory muscles.

But doctors in India who also uncovered the link say it was occurring up to 10 times more than expected.

One of the articles published in the journal broke down the cases spotted in Nottingham, which all occurred within ten days of each other.

Symptoms began 11 to 22 days after the first jab and all of the four men were aged between 20 and 57.

One had no relevant medical history. The three others others had ulcerative colitis, asthma and high blood pressure.

None had been infected with Covid. They were treated with antibodies and steroid pills.

Dr Christopher Allen, a clinical neuroscientist at Nottingham University, who wrote the article, admitted they cannot be certain the jab caused the neurological illness and it could have happened by chance.

But it demonstrates the need for ‘robust post-vaccination surveillance,’ he said. And he added vaccines currently deployed are ‘very safe’.

Dr Allen added the reaction may be ‘a cross-reactive immune response to the SARS-CoV-2 spike protein’, causing the immune system to overreact and the body to attack its own nerves.

Dr Allen said if the condition is caused by AstraZeneca’s vaccine, it will be because spike proteins contained in the firm’s viral vector technology.

Pfizer’s and Moderna’s MRNA vaccines do not contain the same spike proteins, so are unlikely to see similar links to the syndrome.

The second paper by neurologists at the Aster Medcity hospital in Kochi, Kerala, identified seven cases of severe Guillain-Barré syndrome.

They were struck down within a fortnight of receiving the first AstraZeneca vaccine.

Lead author Dr Boby Varkey Maramattom said rates of the condition were between 1.4 and 10-fold higher than would normally be expected.

And the patients suffered ‘unusually severe’ facial weakness — one of the symptoms of the condition.

Four of the cases involved women aged 40 to 70 years — three of whom required mechanical ventilation.

Nerve damage around the face and head occurred in four patients — which happens in less than five per cent of Guillain-Barré syndrome cases.

Dr Maramattom said while the findings suggested the vaccine could be to blame a clear link had been proven and it is ‘unlikely’ the jabs had triggered the syndrome in all cases.

The benefits of vaccination also ‘substantially outweigh the risk of this relatively rare outcome,’ he said.

Covid itself is also linked to Guillain-Barré syndrome, with the virus believed to have triggered the condition in a man, 54, in New Jersey in April 2020.