Gynecologists say it is possible that there is a link between having abnormal periods and the COVID-19 vaccine.

A recent report from the Sunday Times found that 4,000 women in the UK had temporary changes in their menstrual cycles after getting vaccinated.

It mainly included females between ages 30 and 49 who had gotten shots from Pfizer-BioNTech, Modena or AstraZeneca-University of Oxford.

Meanwhile, in the the U.S., there have been accounts of women who have gotten vaccinated against the virus and later had periods that came earlier usual, felt heavier or just appeared irregular.

Two researchers in Chicago have even launched a study looking into whether or not there is an association.

The reports have led some to question why the federal government hasn’t listed irregular menstrual cycles as a potential side effect.

But doctors tell DailyMail.com that cycle changes post-vaccination are rare, typically resolve on their own without medication and do not affect fertility. 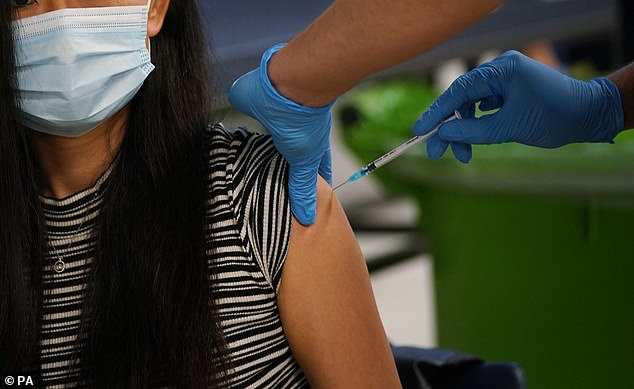 Doctors tell DailyMail.com that menstrual cycle changes after getting the COVID-19 vaccine are rare, typically resolve on their own without medication and do not affect fertility. Pictured: A woman receives a dose of the Pfizer BioNTech COVID-19 vaccine, June 2021

The UK report found that almost 4,000 women reported ‘heavier than usual’ bleeding or a delayed period after getting the COVID-19 vaccine.

According Britain’s Medicines and Healthcare products Regulatory Agency (MHRA), there were 2,734 reports of irregular periods linked to the AstraZeneca jab up until May 17.

Another 1,158 women had menstrual changes after receiving Pfizer’s shot and the remaining 66 reported changes after getting the Moderna immunization.

‘The number of reports is low in relation to the number of women who have had the vaccine to date and the background rate of menstrual disorders generally.

‘We continue to closely monitor these reports for potential signals.’

Two researchers are running a study to determine if there is any link between abnormal periods and the COVID-19 vaccine.

Dr Kathryn Clancy, an associate professor at the University of Illinois Urbana-Champaign, and Dr Katherine Lee, a post-doctoral scholar in the public health sciences division at the Washington University School of Medicine in St Louis, each received their shots earlier this year.

Both women noticed that aside from the usual side effects – such as a pain at the injection site – they also had temporary changes in their menstrual cycles.

Clancy first discussed her abnormal period in a tweet in late February after receiving the Moderna coronavirus vaccine.

The tweet was liked more than 1,200 times and she received hundreds of replies from other women and people who menstruate documenting their unusual changes.

The responses inspired Clancy and Lee to conduct a formal study.

Lee told the Chicago Tribune in April that more than 25,000 people have completed the survey.

Dr Shady Diouf, director of Ambulatory Obstetrics and Gynecology at Brigham & Women’s Hospital in Massachusetts, said that she and her colleagues have heard anecdotal reports of patients with abnormal periods.

‘A handful of patients have mentioned this, having heavier periods or irregular periods after receiving the vaccine,’ she told DailyMail.com.

‘First time I heard about it, I rolled my eyes thinking: “Oh everything is related to vaccine.” Now I’ve heard it a handful times and I take it more seriously.’

Diouf said that she believes the rare side effect is likely caused by stress.

‘Periods can be irregular die to stress or hormonal fluctuations that have something to do with stress,’ she said.

‘I consider the COVID-19 vaccine somewhat of a physiologic stress. It’s trying to tell your body to do something it hasn’t done in a while, to mount an immune response.

In turn, this places stress on the body, which can cause irregular periods, Diouf explained.

Dr Mark Werner, an OBGYN at Beaumont Hospital in Royal Oak, Michigan, said the stress can also be caused by worry about the vaccine.

‘You might walk in there, you might be nervous and get the second [shot]’ which causes a person to release stress hormones, he told DailyMail.com.

Both doctors said they want to emphasize the changes to the menstrual cycle after getting a COVID-19 vaccine should not be conflated with an impact on fertility.

‘There’s no scientific data to back that claim up. If someone is having irregular cycles, bleeding in between.. it might be three months or four months and then can go away on its own.’

Diouf added: ‘It’s too early to say there is an association with fertility issues. I would not make the association of irregular menstrual cycles and infertility.’

The physicians also said that, based on the evidence they have seen, getting a COVID-19 vaccine outweighs any potential risk

‘Thinking about slight menstrual irregularity, like five days of bleeding instead of three, when you look at it in the big scheme of things, it’s certainly not a risk,’ Diouf said.