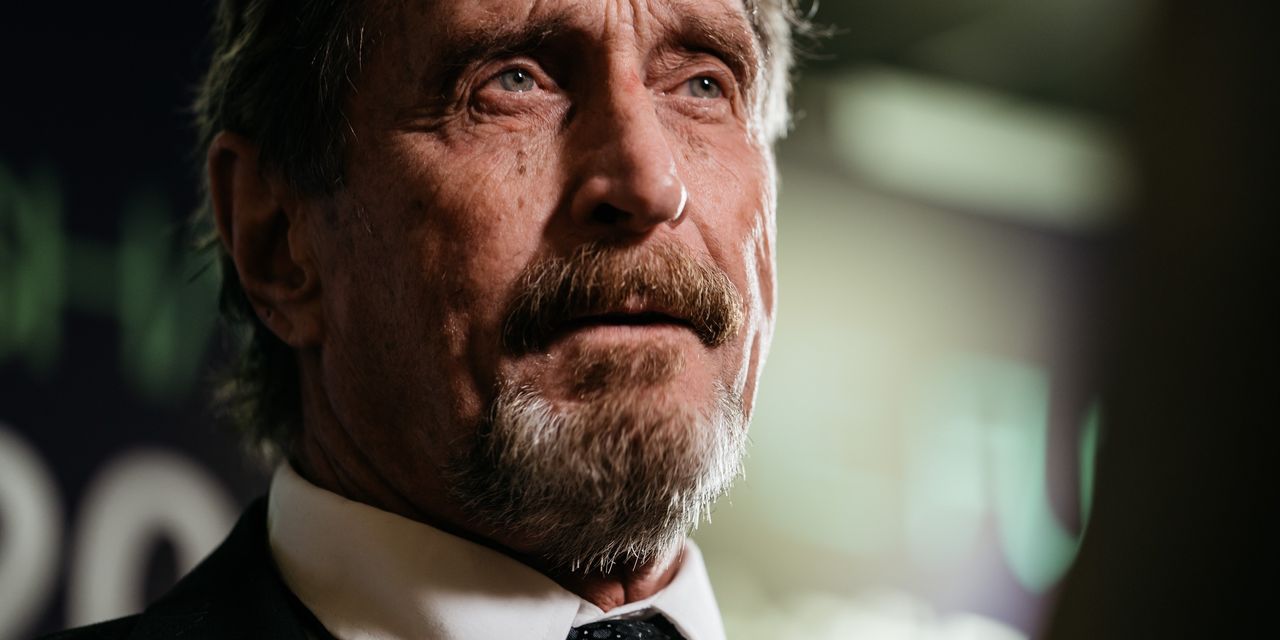 made a fortune estimated at more than $100 million from antivirus software for computers in the early 1990s and then pursued an increasingly bizarre life of adventure and run-ins with legal authorities in the U.S., Central America and Europe.

“My personality is such I can’t do something halfway,” he told The Wall Street Journal in 2007. At the time, the entrepreneur was 61 years old and was then focused on his hobby of flying small, open-cockpit planes around the desert. Mr. McAfee’s legend continued to spread through his promotion of yoga and cryptocurrencies with unfiltered and sometimes sexually explicit and profanity-laden speech on social media and in interviews. He died Wednesday in a Spanish jail cell; authorities said his death was likely a suicide.

On Friday his wife,

told reporters in Spain that John planned to appeal an extradition order to the U.S. in connection with federal tax-evasion charges, the Associated Press reported, and he told her Wednesday that “‘I love you and I will call you in the evening.’”

John David McAfee was born in England on Sept. 18, 1945, according to public records. He is widely reported to have been raised in Salem, Va., by an American father and a British mother.

A 2013 profile of him in Wired said his father worked as a road surveyor and his mother as a bank teller. The article quoted Mr. McAfee as saying his father was a heavy drinker and beat him and his mother severely. The father shot himself when John McAfee was 15, according to the Wired article, which quoted the software company founder as saying about his father: “Every relationship I have, he’s by my side; every mistrust, he is the negotiator of that mistrust.”

He graduated from Roanoke College in 1967 with a degree in mathematics. Over the next two decades, he worked for a variety of companies including

doing work involving computers and software. As a sideline, he operated a business called American Institute for Safe Sex Practices, one of several ventures that sold wallet-size cards stating when their holders had last tested negative for HIV.

By the late 1980s, he had founded McAfee Associates, run at first out of his converted farmhouse. The Santa Clara, Calif., company in its early days offered antivirus software free to individuals and for a fee to corporate users. In 1989, he told the Journal, the bulk of the company’s revenue came from large corporations paying “several dollars per computer” to use the software. “We haven’t spent a penny on advertising,” he said.

In television interviews, he said the virus already was inside as many as 1.5 million personal computers. His office wall featured a painting of a spaceship cruising through the universe zapping viruses.

The virus proved far less dangerous than his warnings had suggested. The Michelangelo virus could wreak havoc on computers, but Mr. McAfee “blew the problem out of proportion,”

an antivirus researcher with the Bulgarian Academy of Sciences who has studied computer viruses since the late 1980s, said on Thursday.

McAfee Associates found success with its offerings, and in October 1992, the company completed an initial public offering of shares. Mr. McAfee stepped down as chief executive in 1993 and eventually severed his ties with the company.

Mr. McAfee cut an unconventional figure at the company he founded, initially giving away his software on floppy disks distributed from the back of a van,

who was an executive assistant at McAfee in the early 1990s, said on Thursday. When Ms. Nation first met Mr. McAfee in 1993, she said, he was wearing ripped jeans and tennis shoes and she mistook him for a mailroom employee. “I wasn’t even sure if he had soles on the feet of his Vans,” she said.

Ms. Nation described Mr. McAfee as hard-working and recalled the executive having a “penchant for women and drugs and sex.” The company, at the time, reflected his freewheeling attitude.

who said he was hired as McAfee’s first full-time employee in 1989, remembers his former boss as a charismatic and personable salesman. “The early employees believed we were on a mission to rid the world of computer viruses,” Mr. Goretsky said Thursday.

Mr. McAfee bought real estate in Hawaii, Colorado, Texas, Arizona and New Mexico. He founded businesses such as an instant-messaging company, Tribal Voice Inc., though he later sold his shares in the venture. For a time, yoga was his obsession. He wrote four books on the subject and offered seminars. Soon, however, teaching daily yoga classes “began to feel too much like work,” he said in the 2007 interview with the Journal.

He found a new passion: “aerotrekking,” or flying at low altitudes in open-cockpit planes resembling motorcycles with wings. Mr. McAfee said he had spent more than $11 million to build a network of eight airports in remote areas of New Mexico and Arizona. He led a group of pilots known as the Sky Gypsies who shared his love of skimming over desert floors.

He also began selling his U.S. real estate, sometimes through auctions to speed the process. In 2009, the New York Times reported that his fortune had dwindled to about $4 million from more than $100 million.

After moving to Belize, he built a compound there and told interviewers he was backing research to find natural antibiotics in the rainforest.

“He would always surround himself with groups, whether it was in Silicon Valley or in his yoga retreat or in Belize,” said

whose 2016 documentary “Gringo: The Dangerous Life of John McAfee” chronicled the entrepreneur’s life in Belize. “He would create a community of people around him who would worship him,” she said.

When she was working on her documentary, Mr. McAfee initially said he wouldn’t cooperate with the film, Ms. Burstein said, but then he ended up trying to control her narrative via a string of email messages. “He would email me multiple times per day with the craziest, sometimes humorous, sometimes threatening, sometimes downright scary emails,” she said.

In 2012, authorities in Belize sought to question him in connection with the killing of a neighbor,

Mr. Faull had filed a complaint about Mr. McAfee, alleging that the former software mogul’s security guards were trespassing on his property and that dogs kept on the entrepreneur’s compound were a nuisance, the town mayor said at the time.

Mr. McAfee denied any involvement in the killing and eventually fled to Guatemala. He was arrested there on a charge of entering the country illegally, and later Mr. McAfee said he faked a heart attack in order to avoid being returned to Belize when his asylum request was denied.

He was later deported to the U.S. but not charged with a crime, according to the AP. A federal judge ordered him in 2019 to pay $25 million in a wrongful-death suit brought by Mr. Faull’s estate, a judgment Mr. McAfee railed against.

Mr. McAfee used social media to burnish his image and frequently discussed cryptocurrencies, politics and failings of the U.S. government. In 2016 Mr. McAfee participated in a debate among Libertarian presidential candidates aired on Fox Business Network.

He also gained infamy in recent years in connection with his U.S. business dealings and personal finances. At the time of his death, he was facing federal criminal charges including tax evasion, securities fraud and money laundering. Also pending against Mr. McAfee were civil fraud cases brought by the Securities and Exchange Commission and the Commodity Futures Trading Commission.

The tax-evasion charges, unsealed in October in Tennessee federal court, alleged that Mr. McAfee didn’t file tax returns from 2014 to 2018 despite earning millions of dollars from promoting cryptocurrencies, consulting, public speaking and selling the rights to his life story for a documentary, prosecutors said.

“I am charged with tax fraud—which is lying on your tax return,” he wrote on

in October. “But I have filed no returns for many years and have made no secret of it. If I have said nothing, how could I have lied?”

The securities-fraud and money-laundering charges were made public in March. An indictment alleged that Mr. McAfee, his bodyguard, and other associates earned more than $13 million by manipulating cryptocurrency prices and concealing his ownership of other digital assets while touting them to investors. The conduct occurred in 2017 and 2018, according to Manhattan federal prosecutors, who filed the case against him.

In past messages on Twitter, Mr. McAfee disputed the notion that he had engaged in misleading promotions of cryptocurrencies and that he was being used as a scapegoat in a broader U.S. crackdown against crypto. “I chose coins I believed had value,” he wrote in March. Mr. McAfee also continued to rail against what he saw as governmental overreach. “I’m in prison for refusing to file tax returns, while government bureaucrats use your taxes for private planes, lavish parties and all other benefits of their power,” he wrote in October.

Mr. McAfee spent the last eight months of his life incarcerated in Spain. Even after his arrest, he continued to post regular Twitter messages to his roughly one million followers, pontificating about politics, computer security and his life behind bars. One of his last posts, on June 18, was about the corrupting influence of power.

“Boy, I do live an exciting life,” Mr. McAfee said in a 2013 interview with the South China Morning Post. “It’s too exciting, sometimes.”

—Dave Michaels contributed to this article.

Write to James R. Hagerty at bob.hagerty@wsj.com and Robert McMillan at Robert.Mcmillan@wsj.com