Tom Hanks has done multiples movies where he plays the ‘nice guy’ who does the ‘right thing.’ In fact, some would even argue that he has made an entire career out of playing good men on screen. Seriously, do you remember any movie where he wasn’t doing the correct thing and winning hearts? Hard to recollect, right? As it turns out, Hanks, America’s sweetheart, has portrayed a darker variety of roles on screen. But there are only a handful of them, and they are neither critically acclaimed or commercially successful. Sam Mendes directorial Road to Perdition was an interesting line to walk for Tom, especially in the latter half of his career. By the time Hanks donned the hat (literally) of the quiet assassin Mike Sullivan, he was already two decades old in Hollywood.

Some would say that this is the time when actors come into their own and are willing to stretch boundaries, and others would be dismissive of such a risk, given that the times Hanks did play the bad guy, it didn’t turn out so well in the end for the film. But Hanks had made up his mind, even though he had said that he would never go out of his way to play the baddie. In Road to Perdition, Hanks does what he rarely gets to do on screen — hold a gun and walk cobbled streets as everyone looks at him with fear in their eyes.

For the lack of a better word, Tom Hanks plays an antihero in Road to Perdition. Someone who has dubious intentions, cannot be easily trusted, but still somehow manages to stay loyal to his foster father and local don, John Rooney (played by another American legend, Paul Newman). Daniel Craig plays Rooney’s son, Connor. Connor is a foolish, conceited man jealous of his father’s bond with Mike. And so Connor does something he knows will hurt Mike the most and make him turn his back on his father. Connor murders Mike’s wife and younger son. What follows forms the crux of the plot. 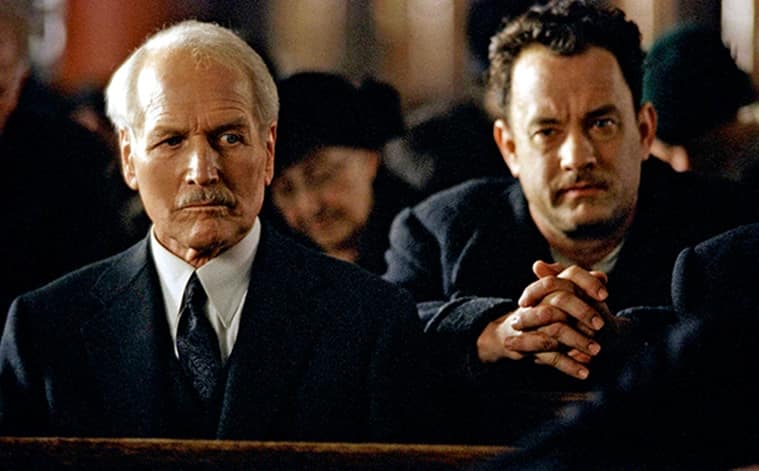 Here is what is different about this mob story in particular. Set in the depression era, this period piece is as much about the violence of gangs, as it is about fathers and sons. Conventionally, fathers are not known to be very expressive, and this was more of a reality back in the day. Here, we see a similar kind of relationship between Newman and Hanks’ characters, between Craig and Newman’s character. Then there is the chord that binds Hanks’ Mike to his elder son, Michael. All these relationships practice the idea of a ‘tough love.’ But tough love doesn’t mean that you are not willing to go the extra mile for your offspring. It is this almost-paradoxical nature of these ties that keep the audience engaged.

And if you had any misgivings about how the sweetest guy of Hollywood, Mr Tom Hanks, would play this stern, silent father-figure who wields a gun for a living, then throw those doubts out of the window. Because Hanks plays Sullivan with honesty, and yes, with that sincerity which is the signature of every Hanks performance. He never gives you a chance to disbelieve him. You never imagine anyone else as the quietly dangerous but loyal hitman, Mike. It also helped that the ensemble cast was just as credible, if not more. Especially Tyler Hoechlin (Hanks’ on-screen son), Daniel Craig, Jude Law and Paul Newman.

Road to Perdition is a beautifully filmed film, filled with expressive silences which are only broken by bloodshed and gunshots. And Tom Hanks leads the movie ably, with a determined, stately conviction about him.