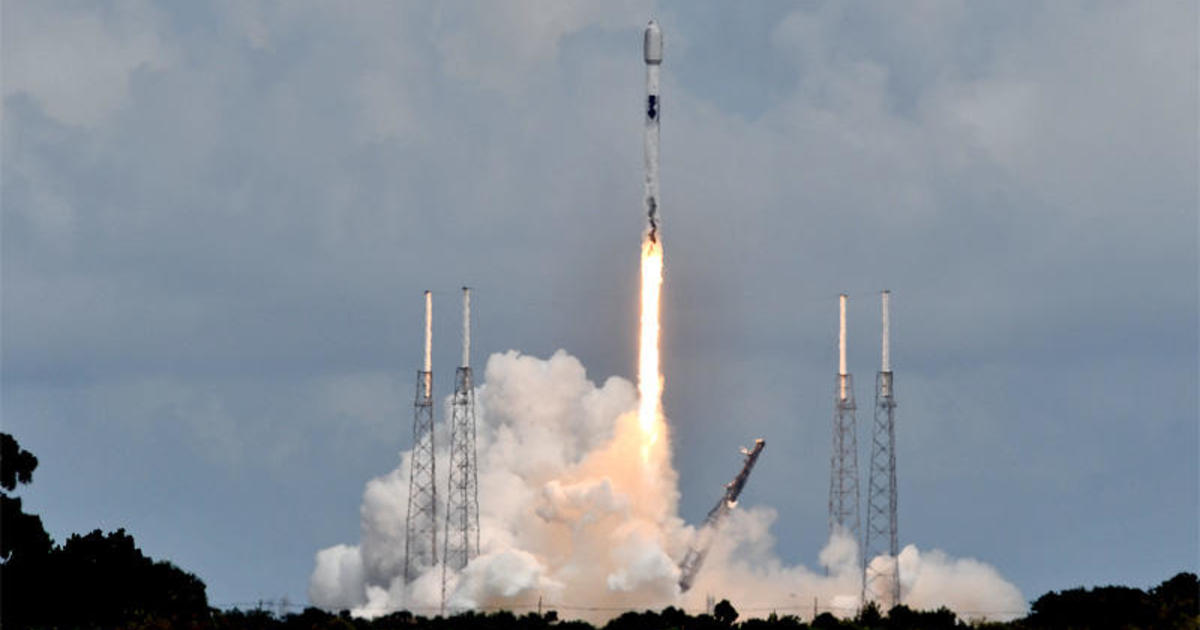 A SpaceX Falcon 9 rocket carrying 88 small satellites blasted off from Florida Wednesday, flew over Cuba and climbed into polar orbit while the first stage, making its eighth flight, flew itself back to a picture-perfect Cape Canaveral landing.

Heralded by twin sonic booms, the well-traveled first stage, charred and sooty from re-entry heating, touched down about eight-and-a-half minutes after liftoff, chalking up SpaceX’s 89th successful booster recovery and its 20th at the Cape Canaveral Space Force Station.

It was SpaceX’s first Florida landing since last December because of orbital requirements and payload weights that that did not leave enough left-over propellant to make it back to the launch site. Instead, those rockets headed for landings on off-shore droneships, all but one of them successful.

The launching Wednesday was just the third polar orbit flight, all by SpaceX, since 1969. Polar launches are typically staged from Vandenberg Space Force Base in California to avoid flying over heavily populated areas. But SpaceX won approval to target polar orbits from Florida based on the planned trajectories and the rocket’s automated self-destruct system.

And so, instead of taking off to the east or northeast after its 3:31 p.m. EDT liftoff, the Falcon 9 raced away on a southeasterly trajectory and then carried out a “dogleg” maneuver once clear of Florida’s coast to bend the flight path more directly south.

The first stage fell away two-and-a-half minutes after launch, flipped around and fired three of its nine engines to reverse course and head back to Cape Canaveral. The second stage, powered by a single engine, carried out two firings to reach the planned 326-mile-high orbit just under an hour after liftoff.


Over the next half hour or so, all 88 satellites attached to a deployment mechanism atop the second stage were released in a carefully scripted sequence.

SpaceX attempted to launch the Transporter 2 mission Tuesday, but the countdown was interrupted less than a minute before liftoff when a commercial helicopter strayed into the launch danger zone. SpaceX founder Elon Musk blamed the delay on an “unreasonably gigantic” keep-out zone, tweeting “the current regulatory system is broken.”

“Unfortunately, launch is called off for today, as an aircraft entered the “keep out zone”, which is unreasonably gigantic,” he said. “There is simply no way that humanity can become a spacefaring civilization without major regulatory reform. The current regulatory system is broken.”

But after waiting out a weather delay, it was smooth sailing Wednesday for SpaceX’s second “rideshare” mission, offered to researchers, businesses and government agencies as a low-cost way to quickly get small satellites into orbit.

SpaceX charges $1 million to accommodate payloads weighing less than 200 kilograms, or 440 pounds, and $5,000 for each additional kilogram, or 2.2 pounds.

The Transporter 2 mission launched Tuesday featured CubeSats, microsats and orbital deployers owned by a wide variety of companies and agencies, including NASA, the Defense Advanced Research Projects Agency, or DARPA, the Space Development Agency, the Air Force and even SpaceX, which deployed three of its Starlink internet satellites.

Seattle-based Spaceflight Inc. managed 36 of the 88 satellites, including six microsats, 29 CubeSats and a payload hosted on another satellite.

The Pentagon’s Space Development Agency put five satellites on board Transporter 2, including one to test space-based data analysis and four that will test advanced optical communications terminals provided by different vendors.

“We’re trying to figure out the acquisition, the pointing and the tracking,” a senior SDA official said in a statement. “Can we make the connection, can we hold that connection and can we exchange data between two terminals in space with that connection?”

The system will be tested with the satellites up to 2,400 miles apart.

“We’re going to try to send data essentially from D.C. to Denver at the speed of light,” the official said. “And that’s what we’re going to bring to the warfighter over the next several years.”