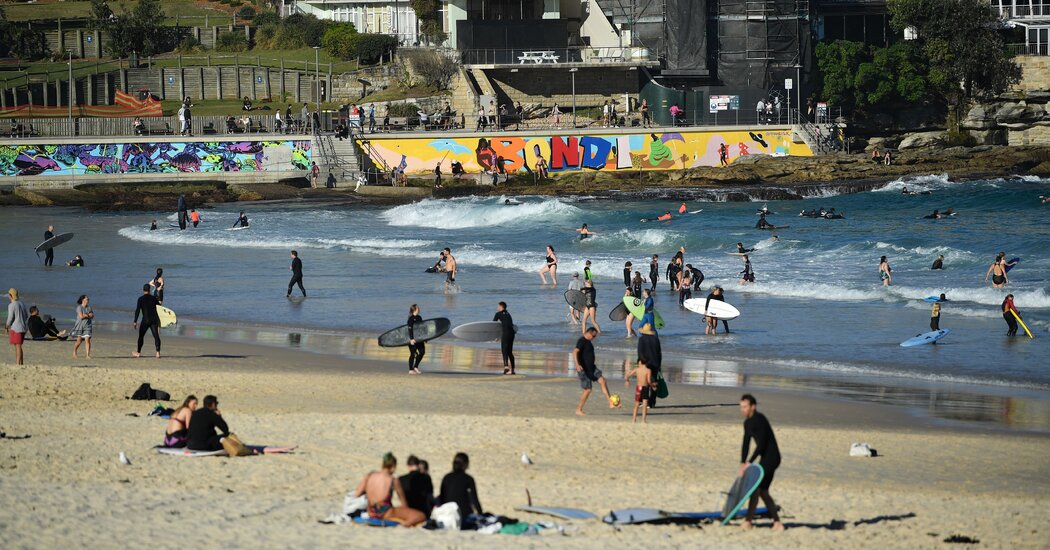 SYDNEY, Australia — Australia faced a grim and anxiety-inducing challenge on Monday: simultaneous outbreaks of the coronavirus in several parts of the country, most notably in Sydney, fueled by the spread of the highly infectious Delta variant.

In Sydney, which has gone into at least a two-week lockdown, cases grew by 18 on Monday and now stand at 130. It is the worst outbreak Sydney has seen since last year.

Other states across Australia also reported a handful of new cases, threatening the nation’s successful control of a virus that has ravaged many countries far worse.

Restrictions have been toughened, with lockdowns in Perth and Darwin, along with Sydney.

“We’ve got to hang in there,” Mr. Morrison said. “We don’t have a choice. The pandemic is still upon us.”

The outbreak is still extremely mild by global standards — no one has died from Covid in Australia since last year. But health officials expect case numbers to increase over the coming days as the Delta variant spreads through close contacts. Tens of thousands of Australians rushed to get tested for Covid on Monday after more than 300 locations around Sydney had been identified as sites of concern, visited by people who were infectious.

An entire primary school — students and staff members — was required to isolate at home for 14 days after a few cases emerged there, and contact tracers are still adding cases to the total from a hair salon where 900 clients passed through while employees were contagious.

Officials are also encouraging everyone who is eligible for a vaccine to line up for one — and that group has been expanded. Mr. Morrison announced Monday night that AstraZeneca doses, which had been restricted to people 60 or older, would be made available to any age group willing to accept the minor risk of blood clotting, after consulting with a doctor.

He also announced that vaccines would be made mandatory for workers who care for the aged and those working with international travelers and people in quarantine. The current outbreak began nearly two weeks ago with an airport limousine driver who had not been vaccinated.

In Sydney, Gladys Berejiklian, the premier of the state of New South Wales, said the vaccines offer an important web of protection, noting that she requested extra doses from the federal government. In the meantime, she said, residents of Sydney in particular must stay home.

“We are keen to not have people move around,” she said.

Two men in Sydney did not seem to grasp that recommendation and ended up providing just the kind of distraction that Australians perhaps needed in the midst of the bad news. They were caught in the woods of a national park, where they fled after a deer startled them out of their naked sunbathing on a secluded beach.

The stay-at-home orders introduced on Saturday did allow for exercise. Fleeing wildlife nude did not qualify. Both men, who were not identified, received fines of 1,000 Australian dollars ($758). Mick Fuller, the New South Wales police commissioner, was not pleased.

“It’s difficult to legislate against idiots,” Commissioner Fuller said at a news conference in Sydney on Monday.

He said the lawbreakers were among 44 people fined on Monday. Most of them were not wearing masks.

Mr. Fuller called the sunbathers ordeal “embarrassing.” But in a moment marked by rising anger at the government for failing to buy and distribute more vaccines, when Australia’s largest city stands to see its economy lose hundreds of millions of dollars from a lockdown, the news of a free-spirited buck naked couple fleeing a buck — or was it a doe? — allowed for, well, something to smile about.

Some people wrote poetry inspired by the deer incident. Others remarked that it clearly showed the paternalism of their nation’s political class.

The news also traveled quickly across the country to Western Australia where the state premier, Mark McGowan, who recently closed his state’s borders to anyone from New South Wales, made clear that it was a Sydney thing.

The two men were found by emergency responders, separately, on Sunday night, at about 6 p.m. after one of them called for help, according to a police statement. It had been a unseasonably warm winter day in Sydney, with pristine blue skies under a glowing sun. Once it set at 5 p.m., though, the temperature dropped to just over 50 degrees Fahrenheit.

One of the men, 30, was found near a remote road in Royal National Park simply with a backpack. The other, 49, was partially clothed. They appeared to have violated the public health orders by leaving home for leisure.