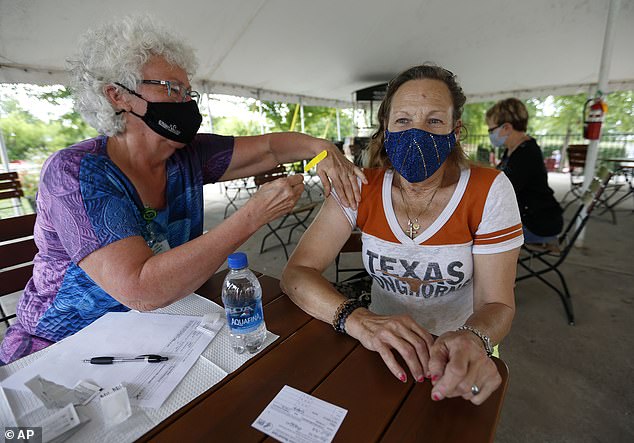 People who have only received one shot of a two-dose COVID-19 vaccine have little protection from the Indian ‘Delta variant’, a new study finds.

French researchers found that the Delta variant has the ability to evade some neutralizing antibodies that are either produced after infection or occur through vaccination.

One shot of either the Pfizer-BioNTech or AstraZeneca-University of Oxford  vaccine ‘barely’ offered any immunity against the variant, but two shots provided ‘robust protection.’

This means that millions of Americans who received just one of the two-dose vaccine may be vulnerable to infection, severe illness or death.

Americans who have only received one shot of a COVID-19 vaccine may not have the antibodies necessary to combat the Delta variant, a study finds 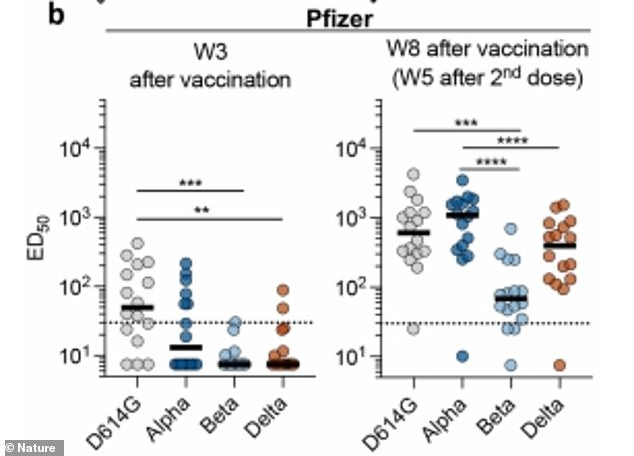 Having only one shot of the Pfizer vaccine left someone with little neutralizing antibodies to combat the Delta variant. The second shot led to an increase in the antibodies that fight the virus, and is believed to be enough to protect people from the variant 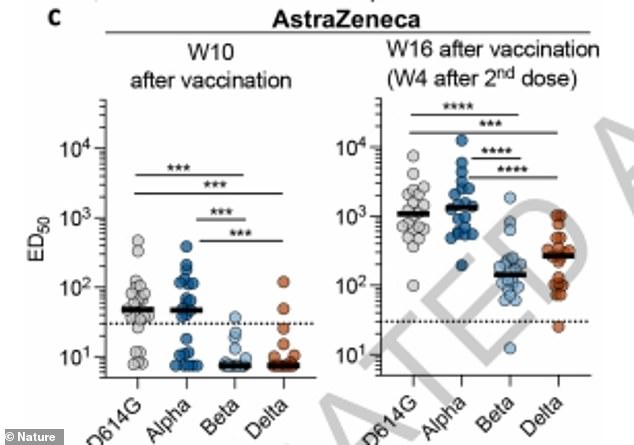 Similar to the Pfizer vaccine, results from study participants who received the AstraZeneca vaccine show that one shot produces little antibodies necessary to fight COVID. Getting a second shot gets antibodies up to acceptable levels, though

For the study, published in Nature, the team took blood samples of people who  got one dose and tested it against the original strain, the Kent ‘Alpha’ variant, the South African ‘Beta’ variant and the Delta variant.

Lab experiments showed one dose left people without the necessary neutralizing antibodies to combat the variant.

Receiving the second shot led to a huge increase in neutralizing antibodies effective against the variant, though.

The Pfizer vaccine is the most widely used in the U.S., while the AstraZeneca vaccine is common in many European and Asian countries.

The Delta variant has swept across the world since first causing an outbreak in India, becoming the dominant strain in both the U.S. and the U.K.

Discovered in September, the strain of COVID is much more contagious than other virus mutations.

The variant then began to make its way across the world, finding foothold in the United Kingdom.

More than 99 percent of new cases recorded in the UK are linked to the Delta variant as well, as the country has lost control of their COVID situation – putting hopes for a return to normal in the near future in doubt.

Some experts fear the country could experience over 100,000 new cases a day in the near future as the outbreak continues.

The United States is now dealing with the early stages of what might be a Delta-caused case surge as well. 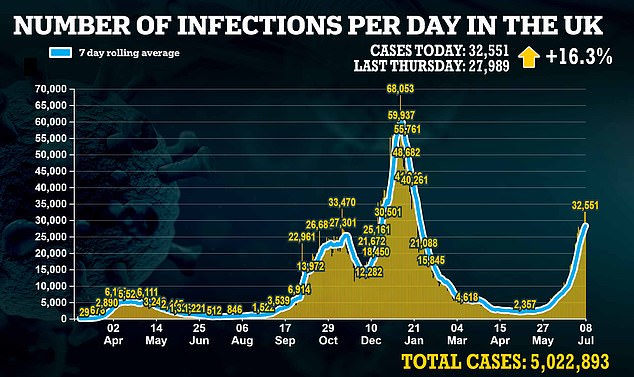 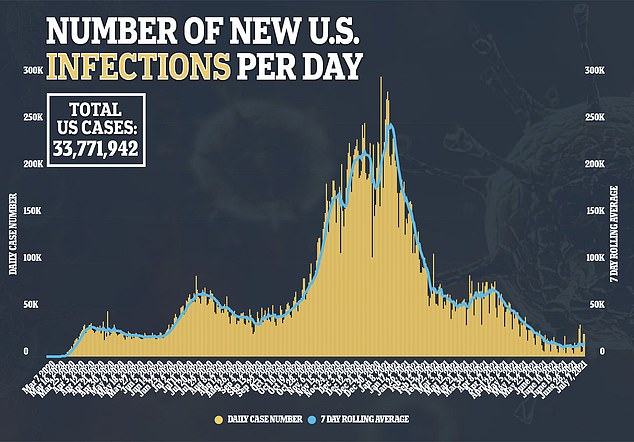 The variant is now the dominant strain in the U.S., accounting for just over half of active cases, per data from the Centers for Disease Control and Prevention (CDC).

Individual states are having their own smaller outbreaks as well.

Missouri is now the nation’s biggest COVID-hotspot, increasing from around 400 a day at the end of the month to around 1,000 a day on average this week – a 250 percent rise – largely because of the variant.

The Midwest as a whole is getting hammered by the variant, according to the CDC.

Rochelle Walensky, director of the agency, said on Thursday that the virus may have a prevalence of over 80 percent in some parts of the region.

Experts also fear that in some parts of the country with lower vaccine rates, smaller outbreak ‘pockets’ will form in some communities.

Dr Anthony Fauci, the director of the U.S. National Institute of Allergy and Infectious Diseases, even warned that ‘two Americas’ could split between regions with high and low vaccination rates.

He pleaded with Americans to drop political difference and get vaccinated on an MSNBC appearance Wednesday night. 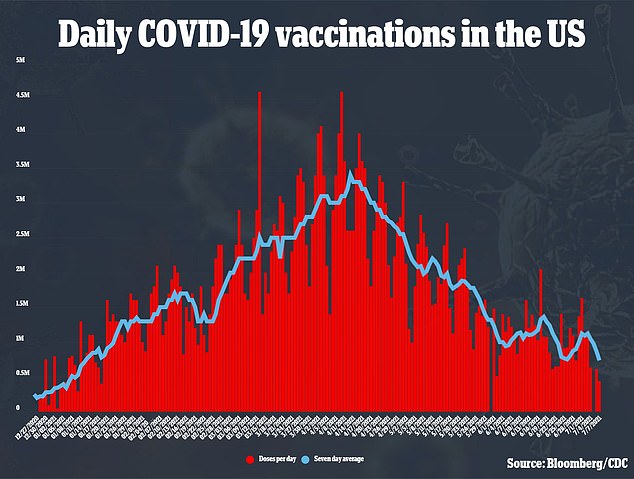 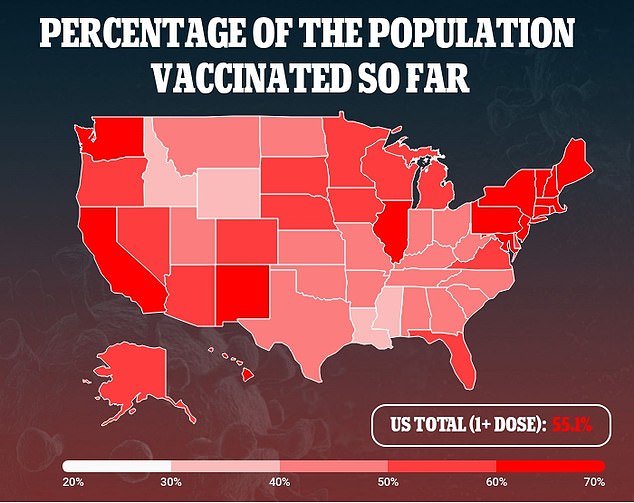 Getting vaccinated is the main form of protection from the virus, and cases around the country have dropped in recent months due to a largely successful vaccine rollout.

A report from the CDC last month found that more than 10 percent of Americans are not returning to get their second shots of the vaccine, though.

Olivier Schwartz, lead author of the French study, which was published in the Nature journal, told the Washington Post that the study provided ‘good news’ since it determines anyone with two-shots should be safe from the virus.

There are some concerns the vaccines are not as effective against the Delta variant as they are against other strains, though. 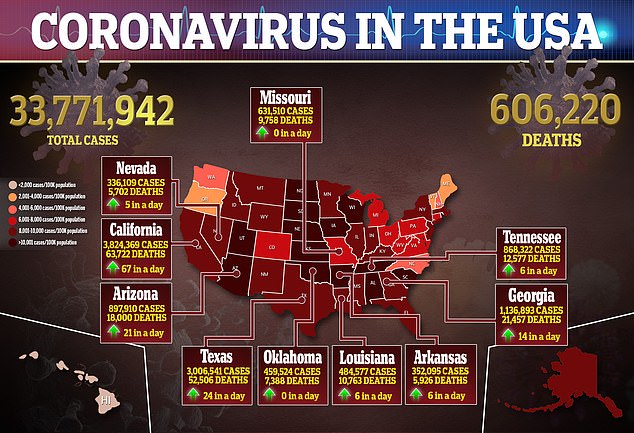