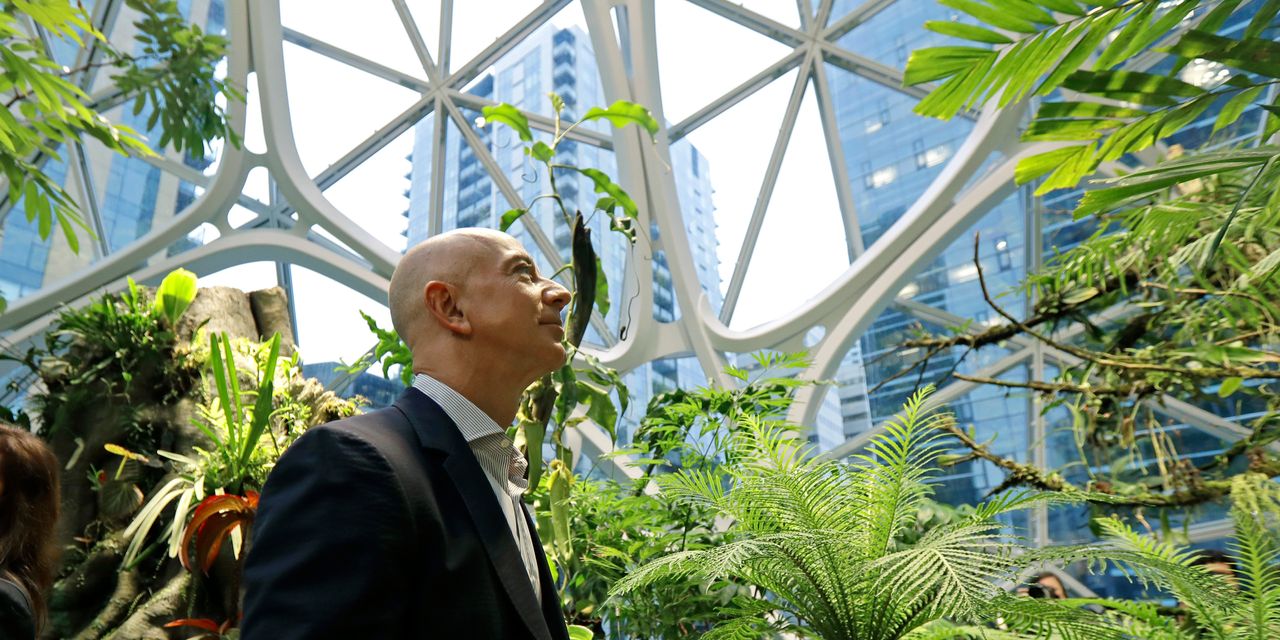 steps down as CEO Monday, it will be 27 years to the day he started

He’s not wasting much time on his second act, or his third.

The trip will be the most public showcase of Mr. Bezos’s pursuits outside of Amazon as he hands off day-to-day management of the e-commerce titan to his successor, Amazon Web Services Chief Executive

Mr. Bezos, the world’s richest person, has been gradually moving to an expansive post-CEO life that aside from space exploration includes a climate-focused philanthropy and an embrace of celebrity, complete with public appearances with actors and moguls, multimillion-dollar homes, globe-trotting on private jets and a soon-to-be-completed superyacht.

The 57-year-old Amazon founder has prepared closely for his departure and is handing the company’s top post to one of his most trusted advisers in Mr. Jassy, even as he has signaled to investors that he intends to remain involved. Mr. Bezos has said in his role as chairman, he will focus on new initiatives and innovations, including on projects to make Amazon’s warehouses safer.

Mr. Bezos in the past has said executive transitions should be “boring” because preparations for a smooth change would have long been in place, according to Colin Bryar, who served as an early technical adviser to Mr. Bezos.

“You don’t want an organization to incur a knowledge gap,” Mr. Bryar said of Mr. Bezos’ thought process on transitions.

Amazon declined to make Mr. Bezos available for an interview.

These days, one of the best ways to know what Mr. Bezos is up to, or his whereabouts, is his Instagram account. One of his latest posts shows him embracing movie star Dwayne “The Rock” Johnson while teasing a partnership between Amazon Studios and Mr. Johnson’s Seven Bucks Productions company. Several recent posts have been about a newer interest—fighting climate change. Mr. Bezos last year announced the creation of the $10 billion Bezos Earth Fund, one of the world’s largest climate-focused initiatives. Mr. Bezos is worth roughly $200 billion, according to the Bloomberg Billionaires Index.

So far, the Earth Fund program has been untraditional and operated largely outside the public eye.

In November, when it announced its first $791 million in grants, it had not yet established an office, hired an executive director or set up a website. Nonprofits working on climate issues said they were in the dark about what Mr. Bezos wanted to fund, or what his overall strategy was. In March, Mr. Bezos announced that the fund had hired

head of the economic and environment nonprofit World Resources Institute, as president and chief executive. In an interview, Mr. Steer said the fund’s first grants showcased its interests in research, data, policy and advocacy.

Grantees say Mr. Bezos’ grantmaking initially has been marked by speed, low levels of paperwork and his direct involvement. Gloria Walton, president and chief executive of the Oakland, Calif. based Solutions Project, which supports climate advocates and landed a grant of $43 million, said Mr. Bezos outlined his inexperience in a call and said he wanted to learn and listen. She said she pressed him to give more grants to community-based groups led by women and people of color, and he was responsive.

“This is the way he does it. There is not a lot of infrastructure. There is not a lot of upfront strategy development, and he is hands-on,” said Angela Anderson, director of the Climate and Energy Program at the Union of Concerned Scientists, which received a $15 million grant. The group said it would use the grant to support updates for the U.S. electrical grid and to help speed up the electrification of commercial trucking.

“He’s conveyed the fact that acting on climate change can actually drive more economic efficiency. It can drive new technologies. It can lower risk,” Mr. Steer said, adding that while the fund is still in its early stages, it will largely be based in Washington, D.C. and plans to build a “world-class team” at the direction of Mr. Bezos.

Mr. Bezos in recent years has spent more time on high-level decisions at Amazon as he’s also transformed into a much more public figure.

He became a tabloid sensation as he began to devote more time to Hollywood parties and events while posting selfies online with celebrities such as the singer Lizzo. Mr. Bezos has been often spotted with his girlfriend, Lauren Sanchez, at celebrity parties, flashy beach clubs, sports games and on foreign trips, including a visit to India last year where Ms. Sanchez joined Mr. Bezos. While in New Delhi, Mr. Bezos pledged to invest an additional $1 billion in the company’s Indian operations. He recently purchased a 417-foot long yacht under construction that cost more than $500 million, according to Bloomberg.

Mr. Bezos has slowly built up a sprawling portfolio of assets, including Blue Origin, more than $300 million in real-estate investments and his $250 million purchase of the Washington Post in 2013. He has devoted primarily every Wednesday to Blue Origin, using a conference room to take meetings and get updates.

On the flight aboard Blue Origin’s New Shepard spacecraft, the plan is for Mr. Bezos to be joined by his brother, Mark Bezos, who co-founded private-equity firm HighPost Capital. Two other passengers are expected to be a yet-to-be-named winner of a charity auction, and 82-year-old pilot Wally Funk, known from the 1960s “

13” program that tested female pilots for astronaut fitness but never sent them to space.

Passenger training involves having to scale the launch tower—about seven stories high—in under 90 seconds. The capsule is fully autonomous and will carry passengers briefly above the Karman line, considered the beginning of space, before returning to earth.

Mr. Bezos, who said the flight is “a big deal for me,” has been working toward the goal since starting the space company 21 years ago in Kent, Wash. For years, Mr. Bezos has sold $1 billion worth of Amazon shares a year to fund the space program.

In an Instagram post announcing the flight, he described the trip as something he has wanted to accomplish since he was a young child.

“The greatest adventure,” he wrote.

Write to Sebastian Herrera at Sebastian.Herrera@wsj.com and Russell Gold at russell.gold@wsj.com