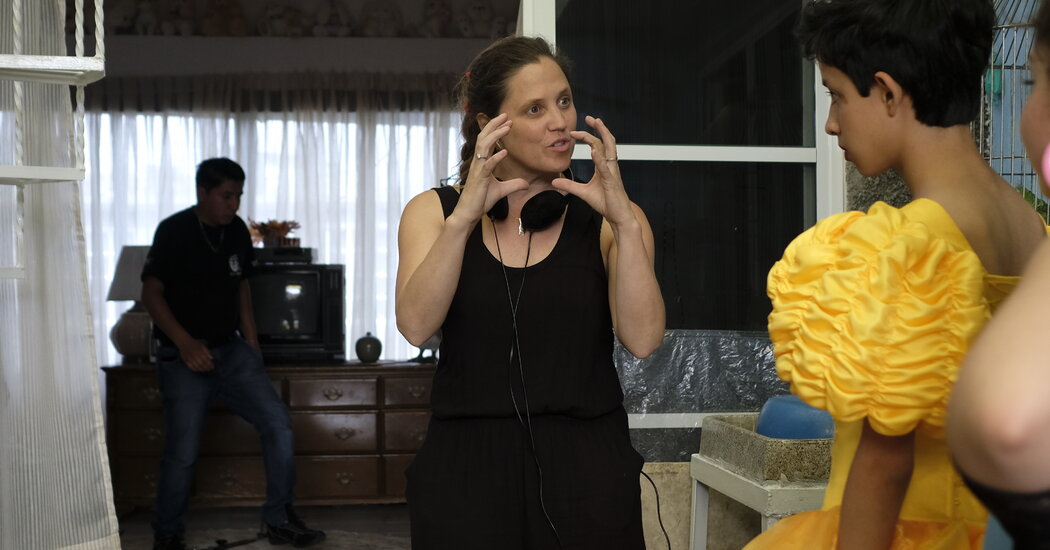 Heidi Ewing knew her friends Iván García and Gerardo Zabaleta for seven years before learning the full story of their journey. Iván and Gerardo first fell in love in the 1990s in Mexico, where they had to keep their relationship a secret. They emigrated separately to the United States, with Iván crossing the border first on foot at great risk.

In New York, the men eventually thrived as restaurateurs, and today run two Williamsburg establishments. But, Ewing learned, the couple remained undocumented, like millions of others.

Ewing, an Academy Award-nominated filmmaker (“Jesus Camp”), recognized a captivating romance when she saw one. But how could she portray her friends’ in-between status, living in a world that kept forcing them to conceal basic facts of their existence?

In “I Carry You With Me,” now in theaters, Ewing found her own in-between path by filming a hybrid fiction. Spanning childhood through adulthood, from Mexico City to New York, it’s the rare movie that both stars actors — Armando Espitia plays Iván and Christian Vázquez plays Gerardo — and the people being portrayed.

But the project — Ewing’s first fiction feature — looked a little different at first.

“It was so trial-and-error, because when they first told me their story, my go-to was, ‘This is a beautiful documentary,’” Ewing said one morning at a Lower East Side eatery.

Beginning around 2013, she filmed significant moments in Iván and Gerardo’s lives — birthdays, restaurant openings, Cinco de Mayo. She also shot interviews with them (carefully lit and partly inspired by “My Dinner with Andre”). While gathering these materials for several years, she continued to make movies with her longtime co-director, Rachel Grady: “Detropia,” “Norman Lear: Just Another Version of You” and “One of Us.”

But her documentary about her friends kept posing certain challenges. Hardly any archival photos or video of Iván and Gerardo existed, for example. And she usually steered clear of documentary productions that did not have a “current-day evolution of a story or narrative,” as she put it.

There was also the question of doing justice to her friends’ romance.

“You want to see somebody fall in love. A documentary camera is never there — at the bar, the restaurant, the street corner, the subway, the bus, the glance between two people,” Ewing said.

She decided to cast actors to dramatize Iván and Gerardo’s history together. The couple gave their full support.

“Three and a half years ago or so she told us, oh, I have this idea. And we said, what is best? What is the best thing to do to express this? She said, we need to find actors, and we said, ‘OK!’” Zabaleta said in a recent Zoom interview, sitting next to García.

But Ewing continued to shoot documentary footage of Iván and Gerardo until the fiction filmmaking began. When she shopped around a screenplay for financing, there were two kinds of text: black ink for the fictionalized portions to be shot, blue ink for moments she had already filmed with Iván and Gerardo. (After a few solo attempts, Ewing co-wrote the screenplay with Alan Page Arriaga.)

“I guess it was maybe always in the back of my head that I wouldn’t go full-on” with fiction only, Ewing said.

She began shooting in fall 2018 with Espitia and Vázquez playing the couple, who meet at a club in an empty mansion. Iván is working in a restaurant and has a child; he’s separated from the boy’s mother, and keeps secret his sexuality. Gerardo teaches, and he hails from a ranching family.

Younger actors play them as children in flashbacks to formative moments. That includes a harrowing sequence in which Gerardo’s father drives his young son to a field at night and interrogates him about being gay.

“That scene touched me perfectly,” Zabaleta recalled of the traumatic event. “I love my dad. I left behind that moment because it was part of his culture — the machismo in Mexico — not because he was a bad person.”

Espitia and Vàzquez were directed to develop their characters independently, not to observe and impersonate Iván and Gerardo. Beyond a brief initial phone call, the actors did not meet the couple until a gathering during the New York shoot.

All of which seems possible only through deep trust between Ewing and her two friends. The three trace their friendship about 15 years back to a chance meeting at a wine bar (Xicala, now defunct) where salsa dancing sealed the deal. Since then, Ewing has been to family weddings of theirs, and has helped bring cash to their relatives. The couple flew to Sundance to support “Detropia” — the same trip where they confided in Ewing about their immigration status.

The closeness meant that Ewing could pick up the phone and simply ask Iván and Gerardo for details if she was in a bind. (“What were people wearing? What kind of music did they play? What kind of stuff did they say?” Ewing remembered asking.) One entire scene — Iván obtaining the recipe for chiles en nogada from nuns — was added late in production thanks to one of these conversations.

Iván and Gerardo stayed out of the nitty-gritty of filmmaking — casting, screenwriting, et cetera — and said they left final decisions to her.

As for the risk of broadcasting their undocumented status in a movie, they overcame initial reservations.

“It’s not easy to show your life as undocumented people,” Zabaleta said. “But we are ready, and already we took the position a long time ago to do this with our names and with our faces, because it is time.”

The production required Ewing to adapt to directing a larger crew than when filming documentaries. She also developed a trick of not officially saying “cut” when shooting, to help preserve a scene’s mood and avoid the usual all-hands-on-deck rush at the end of a take.

At its Sundance premiere in 2020, “I Carry You With Me” won the Innovator and Audience Awards in the NEXT section, and with its theatrical release received largely favorable reviews.

Over Zoom, Garcia and Zabaleta seemed moved by audience responses (including a crucial hometown debut at the Tribeca Film Festival). But there was one question that only they could answer: Were there any scenes in the movie that they remembered differently?

One example leapt out: when Gerardo finally arrives in New York, where Iván has been living and toiling alone.

In the movie, the reunion takes place on Iván’s doorstep. In real life, the setting was 42nd Street at Port Authority.

“He came to 42nd Street to pick me up,” Zabaleta said with a chuckle. And then, slowly, as if replaying the memory in his head: “Sometimes the reality is better than the fiction.”