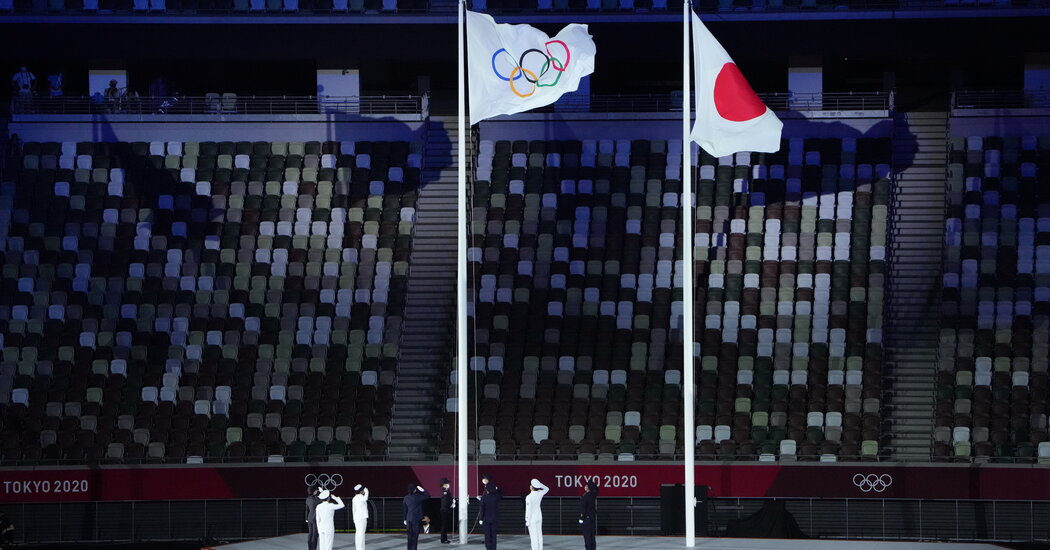 TOKYO — The opening ceremony of the 32nd Summer Olympics unfolded in subdued fashion on Friday night inside a nearly empty Tokyo stadium, inaugurating a Games delayed by a year and diminished in atmosphere by a tenacious pandemic.

With attendance limited to fewer than 1,000 dignitaries and other invited guests in an Olympic Stadium built to seat 68,000, the ceremony’s centerpiece — the athletes’ procession — was staged entirely for television.

Masked athletes, many in reduced contingents to preserve social distancing, waved at nonexistent fans as they marched in. Dancers in pastel costumes and hats provided the only live encouragement during what is normally an exuberant parade before a wildly cheering audience.

Just as notable as the missing supporters were the prominent political and business leaders who decided not to attend, worried about being seen as endorsing an event that has lost much of its meaning among a Japanese public exhausted by the pandemic and widely opposed to the Games.

Nearly all of the events, like the opening ceremony, will be held without spectators, and the athletes will compete under strict protocols that limit their movement.

Usually it is the Olympians who face considerable odds, but this time it was also the organizers who waged an uphill battle to get to this moment. What was meant to be a showcase of Japan’s gleaming efficiency, superior service culture and appeal as a tourist destination has instead been swamped by infection fears and host committee scandals.

The opening ceremony is often the host nation’s chance to show itself off — think of Beijing’s regimented drummers in 2008 or London’s dancing National Health Service nurses four years later. But the Tokyo organizers put on a simpler show.

In a moment of silence, an announcer asked those watching around the world to remember those lost to Covid-19 and the athletes who had died in previous Olympics, including the Israeli athletes killed during a terrorist attack at the Munich Games in 1972.

Although it was not explicitly mentioned until the organizers gave their speeches, the ceremony invoked the original framing of Tokyo’s Olympic bid — as a symbol of the country’s recovery from the devastating earthquake, tsunami and nuclear disaster in Fukushima in 2011. A sole figure dressed in white and in ghostly makeup danced on a platform in the middle of the field as waves of light coursed around the stadium.

And with lighted drones above the stadium forming a giant rotating globe, a rendition of “Imagine” sung on the Jumbotrons by performers like Angélique Kidjo, John Legend and Keith Urban, and confetti doves falling from the sky, the organizers were clearly trying to divert the message of the Games away from the pandemic and scandals and toward the more anodyne themes of peace and global harmony.

But that messaging may have little resonance with the Japanese public, as coronavirus infections in Tokyo have risen to a six-month high and the domestic vaccine rollout has proceeded slowly.

In quieter moments throughout the ceremony, protesters outside the stadium could be heard yelling “Stop the Olympics” through bullhorns.

“I can’t really think of any meaning or significance of why we are doing all this,” said Kaori Hayashi, a professor of sociology and media studies at the University of Tokyo. “We kind of started with the recovery of Fukushima, but that’s completely forgotten. And now we want to show the world that we have overcome Covid-19, but we haven’t overcome it at all yet.”

While the pandemic has presented an unprecedented challenge to the Games’ organizers, it has been far from the only one.

Just a day before the opening festivities, the organizing committee dismissed the ceremony’s creative director after it emerged that he had made jokes about the Holocaust years ago during a television comedy skit.

His firing came just days after a composer for the ceremony resigned — and organizers withdrew a four-minute piece he had written — in response to a vociferous social media campaign criticizing him for severely bullying disabled classmates during his school years.

These were only the latest scandals in a long line of setbacks. Two years after winning the bid, the government abandoned a sleek stadium design by a famous architect, Zaha Hadid, because of ballooning costs. The organizers had to scrap their first logo after plagiarism accusations. French prosecutors indicted the president of Japan’s Olympic Committee on corruption charges related to the bidding process. Fearing extreme heat in Tokyo, the International Olympic Committee moved the marathon to Sapporo, on Japan’s northern island, 500 miles from the Olympic Stadium. And the president of the Tokyo organizing committee was forced to resign after making sexist comments.

Still, now that the Games have finally arrived, the sheer spectacle of the world’s largest sporting event started to push those issues aside.

The night before the opening ceremony, Aya Kitamura, 37, a traditional Japanese musician, biked to the Olympic Stadium to stake out the best viewing spot from outside the venue.

“Of course, I understand that there are many opinions about the Olympics,” said Ms. Kitamura, who said her parents had often told stories about watching the 1964 Tokyo Olympics. “But as the Games get closer, I think everyone is getting a little more excited day by day.”

The near absence of spectators disappointed some who said they did not understand why the Olympics were different from other recent sporting events attended by large crowds in Europe, where infection rates remain higher than in Japan.

“It’s kind of unfair that only a limited amount of people are getting to watch the opening ceremony,” said Hinako Tamai, 19, an Olympic volunteer who was helping to guide the media into the stadium on Friday night. “But because of Covid, there’s not much we can do.”

Among the several hundred people who sat in the $1.4 billion Olympic Stadium for the opening ceremony on Friday were Japan’s emperor, Naruhito, who officially opened the Games; the American first lady, Jill Biden; President Emmanuel Macron of France, whose capital city, Paris, will host the next Summer Games, in 2024; and Tedros Adhanom Ghebreyesus, the director general of the World Health Organization.

But several high-profile prospective attendees declared that they would not be present, including Akio Toyoda, the chief executive of Toyota, a prominent Olympics sponsor that had decided against running Olympics-themed television advertisements in Japan. Shinzo Abe, the former prime minister who helped Tokyo secure the bid for the Games, also decided to stay away.

Several overseas dignitaries, including Princess Anne of England and the United Nations secretary general, António Guterres, decided not to come, citing coronavirus restrictions. President Moon Jae-in of South Korea canceled a planned visit after being insulted by a Japanese diplomat.

Even if the Olympics avoid becoming a superspreader event, it will be difficult for it to escape the shadow of the pandemic as the Delta variant spreads and daily tallies of new cases in the Olympic Village magnify anxiety.

“I really feel like the pandemic, no matter what, leaves the impression of prioritizing money over public health,” said Jessamyn R. Abel, associate professor of Asian studies at Pennsylvania State University.

While the decision to push ahead with the Games amid a pandemic has focused attention on the billions of dollars at stake for the International Olympic Committee, the scrutiny of the international spotlight has also been harsh for Japan at times.

The yearlong delay has exposed social problems like sexism in a country where nearly all the top jobs are filled by older men, as well as resistance by the conservative government to rights for gay and transgender people.

But in one respect, the organizers seemed to have embraced a more modern outlook.

Marching into the stadium as the flag bearers for Japan were Rui Hachimura, the mixed-race basketball star who plays for the Washington Wizards, and Yui Susaki, a female wrestler. Mr. Hachimura is just one of several mixed-race athletes — Naomi Osaka, who lit the Olympic cauldron, being the most prominent — who are representing a largely homogeneous Japan at the Olympics.

Still, the fanfare can go only so far with a wary public. Kentaro Tanaka, 28, a consultant in Tokyo who was walking his dog near the Olympic Stadium the night before the opening, said he liked soccer and planned to watch the matches but questioned the authorities’ priorities.

“Isn’t there some other stuff the government has to work on?” Mr. Tanaka said, before wondering aloud when he might finally be able to get a vaccination appointment.